Gaza: Should we blame the victim?

I want to clarify that I am on the side of not killing anybody.


The Hamas charter, widely cited by defenders of the Israeli siege on Gaza, contains some passages that hard to reconcile for many allied with Palestinian liberation. Specifically, the charter states:

“The Prophet, Allah bless him and grant him salvation, has said: ‘The Day of Judgement will not come about until Moslems fight the Jews (killing the Jews), when the Jew will hide behind stones and trees. The stones and trees will say O Moslems, O Abdulla, there is a Jew behind me, come and kill him.’”

According to Kash Nikazmrad of Students for Justice in Palestine, one should view passages from the Hamas charter like the one above as hyperbolic political rhetoric meant to stoke a political base, and not, he says, as something to be taken literally. The focus, he says should be on the genocidal conditions imposed by Isreal that give birth to the resistance.

“The UN recognizes Genocide as anything deterring the progression of human life,” says Nikazmrad, “and that is what (Israel) does in Gaza. They don’t allow them to fish. Settlers come and cut down Olive trees and put concrete on the olive trees. And (Israel) is all outside, and they blame Palestinians for building tunnels to try to bring medical supplies in. What do you think will happen when you build a prison (Gaza) and you prevent people from having any kind of right to life? They are going to try and build tunnels and they are going to try and resist the occupation that is there.” 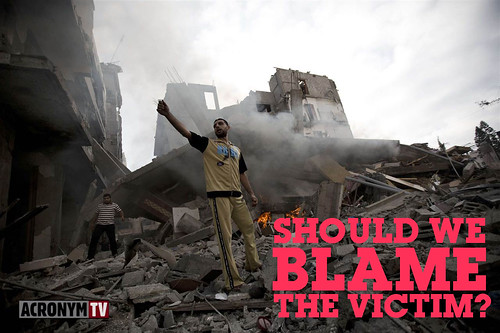