“We are a diverse group of people who have come together against the Israeli occupation and against the massacre. However,” says Kash Nikazmrad, an organizer with Students for Justice in Palestine, “every massacre, every occupation, every act of colonialism always has a mechanism and a supporter. The supporter in this situation has been America.”

Nikazmrad is one of the organizers behind the Los Angeles “Stop The Massacre in Gaza” events.

Judging by the (in)action of Congress, it is hard to dispute Nikazmrad’s claims. When it comes to Israel and Gaza, there is unanimous agreement. As Philip Weiss of Mondoweiss sums up:

The Senate (July 17) unanimously passed a resolution backed by the Israel lobby group AIPAC expressing support for Israel’s attack on Gaza and saying not a word about Palestinian deaths.

The Hill says that the resolution passed “through a unanimous consent agreement.”

The resolution describes Palestinian attacks on Israel as “unprovoked” and says not a word about Palestinian deaths, but speaks of the survival of Israel in urging the dissolution of the unified Palestinian government:


Calls on Palestinian Authority President Mahmoud Abbas to dissolve the unity governing arrangement with Hamas and condemn the attacks on Israel.

“I strongly condemn the heinous attacks being perpetrated by Hamas and other terrorist groups against Israel. No country should have to live under a constant threat of aggression against its people, and I stand shoulder to shoulder with Israel as it defends itself against this shocking violence. My heart goes out to the citizens of Israel and the countless civilians in Gaza caught in this Hamas-initiated violence.”

MJ Rosenberg says it’s all about pro-Israel money, and that Senators have a double standard for US military actions and Israeli ones:

Note that even progressive saints Elizabeth Warren, Al Franken, Sherrod Brown, and Bernie Sanders found nothing in this to object to.   For the record, no U.S. military adventure has had the support of all hundred senators in decades. But, hey, this is Israel. And, more important, this is AIPAC. And cash.

Kash Nikazmrad of Students for Justice in Palestine, joins Dennis on Acronym TV to discuss the growing global resistance to the massacre in Gaza. 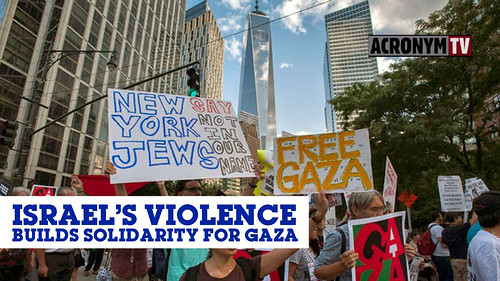