This may be a shock to those who have heard me say, in some of me less than kindler, gentler moments, that Libertarians are Ayn Randian Regressives who more often that not parrot faux liberty talking points literally spoon fed them by some Koch Brothers inspired think tank, talking points that in fact serve as a pillar that upholds the empire of the ruling elite even as they espouse to tear it down. The truth is, however this view ignores the fact that on the surface, we agree on many issues- Libertarians and I.

While the two party duopoly spins a narrative that wants us to believe that we are on opposite sides of a linear spectrum, outliers, freaks, a fringe minority, the fact is that those in all 3 branches of government represent a ruling class whose worldview and means of pursuing it are in fact the minority view, the radical, fringe view. The radical violent revolutionaries are already in power. I’m not talking about Obama, or any other elected official; I’m speaking about the global corporate elite. The same force that is at work here in the US green lighting the pornographic expenditures on weapons and devices for war that make up the military industrial complex while claiming there is no money for education, health care or programs that would benefit the social good is also at work all over the world, notably right now in Brazil, where it is somehow justified to brutally displace entire poor communities in order to build multi billion dollar, FIFA quality soccer stadiums, and to pay for the armed brutal suppression of protestors outraged that in a country where 20% of people who live below the poverty line watch in horror as money is poured into the construction of a brand new soccer stadium in the Amazon that will only play host to 4 games and likely never be used again.

It is the global neoliberal agenda at work here in the US, that is responsible for the NDAA, the spying of the NSA, the threats to net neutrally, the list goes on and on. How to get free from the reign of violent radical revolutionaries who now rule our lives? My guest today, Adam Kokesh, has written a book that attempts to answer that question. Adam Kokesh did a tour in Fallujah, Iraq with the Marines in 2004 and came home to become an anti-war activist. He ran for Congress as a Republican, had a radio show, a TV show, and has gone to jail for his civil disobedience. He is the host of the ADAM VS THE MAN YouTube channel and podcast, and just released his first book, FREEDOM! 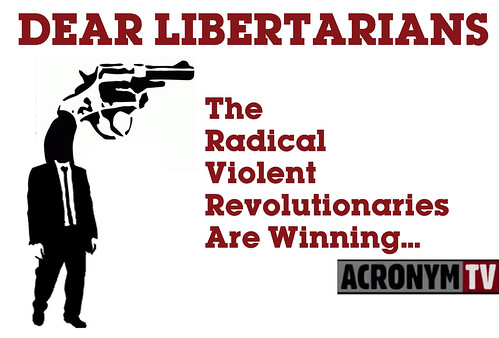 Shouted into the void by The Punk Patriot at 9:02 PM