I love getting feedback!

"FYI - my kid was hanging out after work the other night at the restaurant where he is a busboy on Columbus Ave.He was with his barfly grandmother who is about 83, some of her friends and some friends his own age. He had on his Kill and Eat the Rich shirt. When asked about it, he told the fable Dennis Trainor Jr [performed] which I showed him when I gave him the shirt.

The Fable and the Shirt were very well received.

So, it may not play in Peoria at the moment, but Kill and Eat the Rich is working on the Upper West Side of NYC.

And the fable I wrote:

Then the poor had nothing left to eat, and no place to go. So they had to kill and eat the rich.

They descended on Wall Street by the millions, stopping all traffic.
Their numbers were so large, the police couldn't do anything to stop the massive crowd of the disenfranchised. They flooded the buildings of Wall Street, the halls of DC, of the McMansions of Texas, and like a horde of zombies, they tore into the flesh of the horrified wealthy, who screamed and shat themselves, knowing that they were powerless to stop the oncoming mass of gnashing teeth and hungry mouths.

And as the poor picked the bones clean over the burning piles of money, the poor said to the bones:

"No hard feelings. It's just business, you know?"
Shouted into the void by The Punk Patriot at 7:59 AM 4 comments:

Glenn Beck: "You're going to have to shoot them in the head"

So I have no idea if the shooter in Tucson watched Glenn Beck's show, and I'm not going to try to link this broadcast to the shooting there.

However, the debate we should have is this:

1) Is this supposed to be a "joke?" Or tongue-in-cheek or something? Because it seems like he's being totally serious.
2) How has his audience interpreted these sorts of remarks?
3) Is it okay that we have people on TV calling for their viewers to shoot people in the head if they disagree with you?
4) Does this qualify as hate speech?
Shouted into the void by The Punk Patriot at 8:41 AM 8 comments: 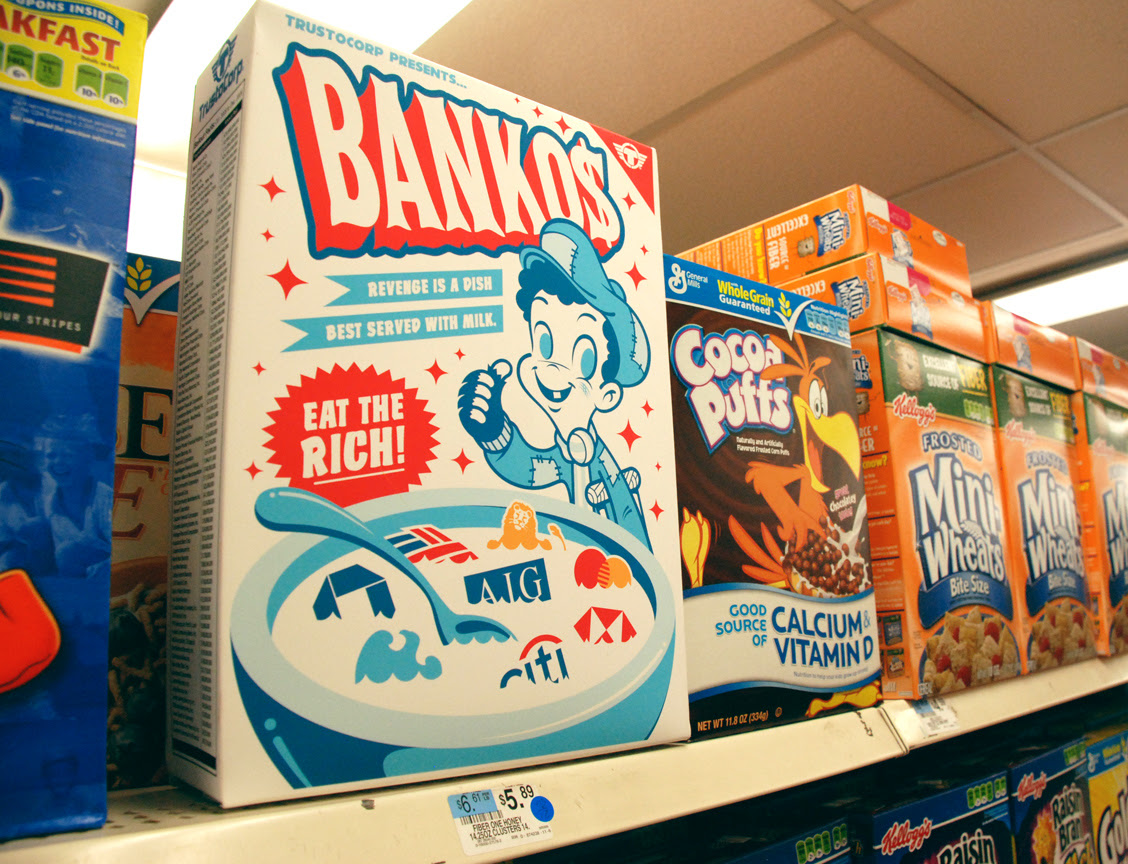 Thank you to Christine Joy Torres for posting this over on my facebook page!

So after the shooting in Tucson, AZ, I became really anxious about the fact that I had made these shirts: 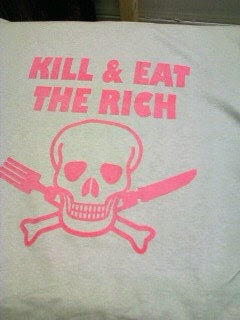 I really struggled with this internally for a while. The thought that this kid out in Tucson might own one of my stupid shirts scared the bejesus out of me, and kept me up at night.

I just want to be clear I DO NOT ADVOCATE KILLING ANYBODY. And I actually have an irrational fear of cannibalism, both of me, and also by me on accident. I blame the German folk story about an amoral sausage grinder that I read when I was a kid...

Anyways. After seeing the cereal box, I feel better about it now. I think it's pretty obvious that the Kill And Eat The Rich is total hyperbole, like how Hilary Clinton and Barack Obama talking about how nuking Iran "is on the table" is hyperbole. They aren't going to do it. They're just taking a threatening posture as a bargaining chip.

I also don't feel that we can or should blame Sarah Palin or Glenn Beck for the shooting than we can blame me. Or maybe I am equally to blame. Either way, I feel really weird about the whole thing.

Please Leave your thoughts below.
Shouted into the void by The Punk Patriot at 9:02 PM 16 comments:

I love when this happens

This American Life has a great article ALL ABOUT MONEY.
What is money?
Why do we think it's real? Etc, etc, etc.

Listen to this episode here: WHAT IS MONEY?

I scooped this story though. Back during the heart of the financial crisis, I too asked "How did 1 trillion dollars just vanish?"
And I discovered, that none of it was actually real. It was all debt that people were trading as though it were money. Not that money is real either. But there were no paper bills. there were just numbers. That's it.

The financial crisis is just a big stupid hallucination.

In the August of 2009 I made this video (forgive the rapping at the beginning):


But really, you should really listen to this article
Shouted into the void by The Punk Patriot at 11:26 AM 6 comments:

Taxation is theft, why should I have my pay stolen to pay for a free ride for other people?

This one is going to take a while to unpack. It requires some knowlege of recent economic history, which is going to mean explaining. I hope I don't bore you.

That’s right, 85% of the population has seen their cost of living triple, has had to double their hours they spend working, and as a reward for working twice as much have LESS expendable income than we did 40 years ago.
To recap really quickly- [drawings] the dollar cost of living has tripled, but the actual stuff we’re getting for that cost isn’t three times better. We’re still buying pretty much the same houses and the same wonderbread and the same Jif peanut butter as we did 40 years ago.
So we’re paying three times as much today for the same things we had in the 1960s.
The Average American household had one income earner working 40 hrs a week in 1960, and that was enough to maintain a comfortable standard of living.
For twice as much labor today, 85% of Americans still have an income gap of a third. That money has to come from somewhere. Some households have two adults working 80 hours a week, and still struggle to make ends meet.
For 85% of Americans, we’ve been slowly eased into a starvation diet over the past 40 years.
That income gap, for many people, who thought that going on welfare was irresponsible, had to borrow their wages. Where did they borrow their wages from? From the wealth they already had. We’ve borrowed against our houses, and we’ve used credit cards to fill our income gap. We were told that this was the responsible thing to do. The fiscal reality of it, is that we’ve been cannibalizing ourselves.
If you look at this through another lense, by indexing things to the value of labor-- the value of the labor you produce has been devalued by two thirds. You have essentially been getting paid a third of what your labor is actually worth. That income gap of a third should rightfully be paid by our employers. And where has all that money gone?
Check Wall Street. While the value of our labor has been cut to a third of what it was, the value of labor of the average CEO has skyrocketed, from just 30 times the lowest paid employee at their company to 300 times the lowest paid employee.
So while the 85% of Americans who work our asses off just to get by, we’ve seen the value of our labor be devalued, fraudulently, by 300%. We’ve seen the value of labor of CEOs increase, fraudulently, by 1000%. What are they doing differently that they need to be compensated at 1000% more than they were back in the 1960s? Well, there’s a short answer and a long answer:
The short answer: Nothing.
The Long answer: Absolutely NOTHING whatsoever, at all.
Now, who has been deciding what everybody’s labor is worth? The invisible hand of the market? Bullshit. It’s been those CEOs. Of course they are going to give themselves raises and reduce the value of our labor by 2/3rds. They’re greedy, shortsighted people. You would probably do the same. Right? No, actually you probably wouldn’t, because that would be THEFT, and THEFT is wrong.

So let’s get back to our initial conservative talking point: Why should you allow somebody else to get a free ride from your labor? You shouldn’t. Which is why we need a maximum wage.
Is taxation really theft? Well, if you’re taxing that top 15% of people who have increased the value of their own labor and decreased the value of everybody else’s labor, we’re not stealing from them by taxing them to pay for welfare. The lower 85% earned that income, but were not paid that income.
The *real* problem is that those richest 15% aren’t PAYING what the 85% is earning by their labor leaving an income gap. How the hell are people supposed to fill that gap through working more if their labor just keeps getting further and further devalued?
With welfare. Welfare is just the lower 85% of people getting what their labor earned them.
If we don’t reverse this trend of the rich getting richer, and the poor getting poorer, eventually there will be no way for the lower 85% of Americans to feed themselves by our own labor.
At which point, we will be forced to kill the top 15% and eat THEM.

Another one I didn't specifically use, but has a lot of the same info as a presentation given at the Commenwealth Club of California two years ago, by an economist whose name I can't remember:
http://sociology.ucsc.edu/whorulesamerica/power/wealth.html
Shouted into the void by The Punk Patriot at 11:44 AM 11 comments: