How Americans Learned to Stop Worrying and Love Guantanamo Prison

An interview with Jason Leopold.


There are many crimes committed in the pursuit of, or as an accessory to, the crimes of US Foreign Policy. I’m not exactly sure where to rank the operation of Guantanamo Bay on that list, but consider these numbers, compiled by the Center for Constitutional Rights:

Of the 149 who remain there, 78 have been cleared for release for years but are still imprisoned. President Obama’s Task Force has designated 38 men for indefinite detention without charge or trial.

The longer the illegal prison remains open, the more accepting of its existence American citizens seem to be, at least according to Gallup poll conducted in the days after the release of Sgt. Bergdahl in exchange for 5 prisoners who were not on that list cleared for release. That poll revealed that 66% of Americans said the U.S. should not “close this prison and move some of the prisoners to U.S. prisons.” That is up from the 53% of Americans who said the same thing in July of 2007. Today, again, according to that latest Gallup poll, just 29% of Americans want the facility closed and the prisoners either released or transported to the U.S.

About the guest:
Jason Leopold is an investigative reporter covering Guantanamo, counterterrorism, national security, human rights, open government, and civil liberties. He's been called a "FOIA Terrorist" by federal employees for his aggressive use of the Freedom of Information Act, which includes successfully suing the FBI to force changes to Bureau FOIA practices. 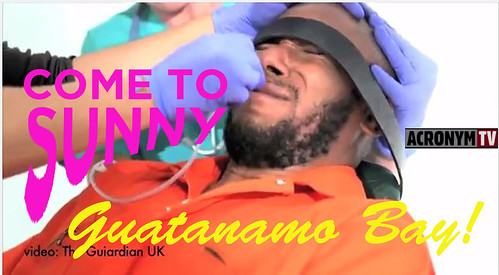 Shouted into the void by The Punk Patriot at 12:54 AM