Imagine the impact if a player from one of the remaining FIFA semifinal World Cup teams (Germany, Brazil, The Netherlands, or Argentina) were to engage in an act of protest against FIFA for it’s Imperial practices that have literarily displaced at least 250,000 Brazilians? Imagine if Lionel Messi, Thomas Muller,Arjen Robben, or even the injured Neymar were to pull a John Carlos sometime during the semifinals or finals of the World Cup?

If any sports organization deserves to be protested, FIFA is it.  As Dave Ziron correctly pointed out, Luis Suárez May Bite, but FIFA Sucks Blood.

In this clip from Acronym TV with Dennis Trainor Jr – Derek Poppert of Global Exchange talks about his Re-Think The Cup series of articles and the potential impact a player from one of the remaining teams calling FIFA out. 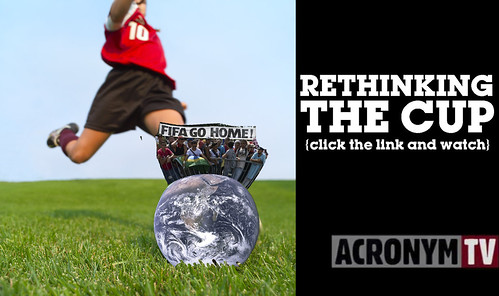 Shouted into the void by The Punk Patriot at 8:37 PM