F**K FIFA: Why A Majority of Brazilians Think The World Cup is Bad For Brazil.


A new Pew Poll finds shows that the “national mood in Brazil is grim following a year in which more than a million people have taken to the streets of major cities across the country to protest corruption, rising inflation and a lack of government investment in public services such as education, health care and public transportation, among other things.”

61% of Brazilians feel that hosting the World Cup is a “bad thing because it takes money away from public services” vs. just 34 percent who think it’s a “good thing because it creates jobs.” Thirty-nine percent say it will hurt Brazil’s international image, while only 35 percent think it will help.

In this episode of Acronym TV, Derek Poppert of Global Exchange talks with Dennis about his Re-Think The Cup series. In a recent piece from the series,FIFA: Return The Beauty To The Beautiful Game, Derek writes:

“So who wins the World Cup? While it may seem that decision is still getting played out in stadiums across Brazil, FIFA president Sepp Blatter is surely laughing from his luxury suite.

The winner had already been decided well before the first match even began. FIFA’s 4 billion dollars in untaxed revenue from the event is the trophy.

It appears to be of little interest to Mr. Blatter or other FIFA execs that this trophy has come on the backs of 200,000 low-income people beingforcefully evicted from their homes to make room for the event, 8 construction workers dying in the frenzied rush to erect stadiums on time, or 14 billion dollars in Brazilian taxpayer money being spent on the tournament in the face of poverty, inequality, and widespread social issues within Brazil.”

David Ziron, author of Brazil’s Dance With The Devil, points out:
“In Brazil, site of the 2014 World Cup, the FIFA-driven push to build new stadiums at a breakneck pace has led to the deaths of nine construction workers. FIFA’s demands for security and infrastructure may end up displacing as many as 250,000 poor people, who live in the favelas surrounding Brazil’s urban centers. The cost of the games continues to tick upward, the latest figures climbing as high as $15 billion. Brazil’s own 1994 World Cup star, Romário, called the 2014 tournament “the biggest heist in the history of Brazil.”

The question becomes, then: Are sports on this scale a net positive or negative for human beings as a whole? 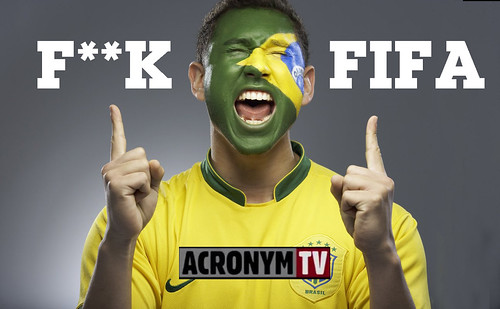 Shouted into the void by The Punk Patriot at 12:16 AM