Sunsara Taylor of Stop Patriarchy sat down with Dennis Trainor, Jr. of Acronym TV just days before leading a month long Abortion Rights Freedom Ride in Texas. The freedom ride is currently underway and will run through September 1, by which time Texas is expected to close all but six abortion clinics statewide.

Stop Patriarchy’s highly theatrical, non-violent yet confrontational style has not endeared them to all activists in Texas fighting for reproductive justice. In fact, a coalition has formed whose sole purpose is to oppose Stop Patriarchy. Texans for Reproductive Justicehas published a Letter of Concern, opposing “Stop Patriarchy’s messaging, tactics, dishonesty, and racism.”
Stop Patriarchy has seen this type of resistance before.

Diane Derzis runs the only remaining abortion clinic in the state of Mississippi. Speaking to Acronym TV on background for this episode, Dianne told us she was “warned about Stop Patriarchy” before they came to defend her clinic during the 2013 Abortion Rights Freedom Ride. Derzis, who now sits on the Abortion Rights freedom Ride advisory board noted that one reason people fear Stop Patriarchy is because their leader, Sunsara Taylor, is a member of the Revolutionary Communist Party.

The way Derzis sees it, however, the fear of, and opposition to Stop Patriarchy goes deeper than a McCarthyism style witch-hunt: it boils down to women in the pro- choice movement being too polite.

“The message I have heard all my life is be good. Be Nice. Be a Lady, you can’t talk like that’, if you will just follow the program, everything fine, we will take care of you,” Derzis told us, before clarifying: “we are seeing the same things we have been seeing for 40 years and (the pro-choice movement) is loosing drastically.”
“This is not just a Texas issue, Derzis emphasized, “we are just he canary in the mines. This is going to happen to everyone. Everyone in this country should be on the Freedom Ride.”

Part 2: (05:25) From Roe V. Wade until today, how did we loose so much ground?
“What once was maybe a Christian-Fascist movement against women’s right to abortion really got elevated and brought into the halls of power. Starting with Ronald Reagan, continuing under Bush, escalating Bill Clinton (quiet as it is kept: Bill Clinton who signed the Religious Freedom Restoration Act, which became the foundation for the recent Hobby Lobby decision).”

“Well first I have to say, (Texans for Reproductive Justice) has this huge Texas flag at the top of their website. Before I talk about the substance of that website, I just have to say that anyone who waves the Texas flag; the flag of the theft of Mexico, the flag that flew over slavery … They became a state because Mexico tried to outlaw slavery. That is what that flag stands for! And (if) you want to wave that flag you are automatically disqualified to talk about liberation. It is a disgusting flag. It is a disgusting notion that people from outside of Texas should not come down here. There are no ‘insiders’ and ‘outsiders’ in a liberation struggle. Texas is a local theater in a national war- frankly- an international war on women. What happens in Texas is going to affect women everywhere.”

Taylor then goes on to dismiss the issues raised by Texans for Reproductive Justice as “tabloid style rumors (and) emotionally accusations that have nothing to do with the positions and the past of Stop Patriarchy. They accuse us of racism for invoking the legacy of the freedom ride. Again, I would rather invoke the legacy of freedom fighters than the flag and the legacy of slaveholders. It is an absurd charge.”

That strategy is loosing, according to Taylor, and has proven deadly.

“For years, there has been a tried and failed approach within the pro-choice movement. It has been an approach of conciliation, of ‘toning it down’, and funneling one’s energies into the electoral arena and into Democratic candidates.”
Part 4: (16:30) Is Stop Patriarchy “Anti-Sex Worker?”
“There is a big difference between being anti-pornography and anti sex worker,” says Taylor. “Stop Patriarchy does stand firmly against pornography, against the sex industry, against the commodification of women’s bodies, against the sexualized degradation of women, and just to be real: what is going on in pornography today is exactly part of this whole revenge against women. I don’t understand how anyone could claim to be for women’s rights and find (pornography) empowering or something we should celebrate.”

Part 5: (19:02) The Abortion Rights Freedom Ride – Ground Zero Texas
Sunsara Taylor about what she calls the local theater for a national war on women and the specific itinerary for The 2014 Abortion Rights Freedom Ride. Including public speak outs in Houston, Austin, San Antonio, and the Rio Grande Valley as well as “Confrontational, dramatic, non-violent political protest that delivers the verdict of these hearings to appropriate individuals/institutions. Protesters will brandish bloody coat-hangers, images of the women who died from illegal abortions, and shackles representing female enslavement.”

The objective of the Freedom Ride, according to Taylor, is to build momentum so that if/when Texas shuts down all but six of its abortion clinics by September, “that that moment becomes part of a turning point where people actually respond in outrage and this part of gathering the country to stand up and start to reverse the momentum.” 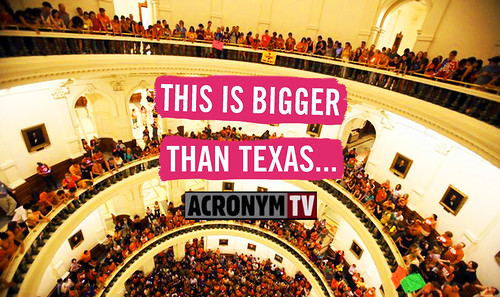 Shouted into the void by The Punk Patriot at 6:06 PM