From Ferguson To Palestine Occupation Is a Crime

After five hours of rallies and marches on justice for Palestine and Ferguson, 1,500 protesters were in Union Square park in Manhattan, all with their hands up for Mike Brown. When the crowd took their hands down, a voice from the crowd told them “Mike Brown never took his hands down. The dead children in Gaza did not get to take their hands down.”

And so it was on this dramatic ending to a long day of complimentary marches in New York Wednesday: the NYC Solidarity with Palestine March over the Brooklyn Bridge and the Hands Up/ Turn Up march in remembrance of Mike Brown energized activists and community members who stood up to racism and oppression “from Ferguson to Palestine.”

A highlight of the solidarity with Palestine march came when activists were able to drop a large banner with the colors of the Palestinian flag from the Manhattan Bridge (facing the march on the Brooklyn Bridge). Text in the flag read “Gaza in our Hearts. Boycott. Divest. Sanction.”

Pictures of the flag billowing from the Manhattan Bridge quickly went viral on social media.

Protesters marched across the Brooklyn Bridge to One Police Plaza in order to call out Mayor De Blasio and NYPD Police Commissioner Bill Bratton for what organizer Nastaran Mohit called “their criminal silence on the issue of Palestine” even as they coordinate and train with the Israeli Defense Forces (IDF).

Many of the protesters from the Palestine march joined the #HandsUp #TurnUp on NYC march.

Joel Northam, a past contributor to Acronym TV, was among them. He described the link this way: “we have people of color living in def-acto internal colonies in the United States. There are no borders. There are only the oppressed and the oppressors.” 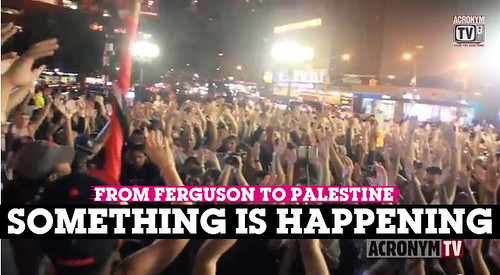