Jason Leopold, in the clip from the full-length Acronym TV episode, How Americans Learned to Stop Worrying and Love Guantanamo Prison, discusses the Obstacles President Obama faces in keeping his campaign promise to restore habeas corpus, shut down Guantanamo Prison, and restore America’s moral stature in the world. If President Obama’s true intention s are as described above, what can he do alone, and what does need cooperation from Congress to do?

“What he could do now is actually start releasing some of these prisoners,” says Leopold “The vast majority of those cleared are Yemeni prisoners. Yemen is a big country. To think that these men, who were never on a battlefield, can’t be sent back to Yemen because they will end up as part of Al-Qaeda (makes no sense).”

Citing President Obama’s major 2013 counter terrorism speech, wherein he acknowledged that a US drone had targeted and killed a U.S. citizen (Anwar Al-Awlaki) and where the President was forced to discuss GITMO because, “it was the height of a hunger strike and it attracted attention around the world.” In that speech, Leopold notes, Obama lifted a moratorium, “that he put into place and here we are year later and there have been no Yemeni’s released. As we saw with the swap with the Taliban of the five prisoners for Sgt. Bowe Bergdahl, that was a fight he was willing to wage with Congress.”

Jason Leopold is an investigative reporter covering Guantanamo, counterterrorism, national security, human rights, open government, and civil liberties. He's been called a "FOIA Terrorist" by federal employees for his aggressive use of the Freedom of Information Act, which includes successfully suing the FBI to force changes to Bureau FOIA practices. 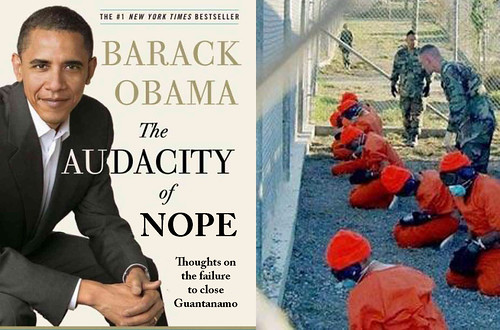