We Are Gaza. Look Into Our Eyes.

Media, money, and mendacity corroding the remains of a heart sold to the musings of Zionist colonial congregation, the truth locked behind the delusion of defense, the a victimizing story lying about Zionist glory….

return the military funding and start the next chapter of your story, the blood NEVER washes off but your comatose conscience will greet the beauty of compassion as the scars of a killer begin to close with vigor, you’ll soon walk upright evolving in the gaza sunlight

The chemicals in the water can’t be prayed away, Zionism is here to stay

White mobs in the streets, chanting death to peace, leave the defenseless Palestinians deceased, burn the olive trees, drain the pipes of hope and wash away the resistance in the streets, cut the electric lines, poison in the food supply, divide the dirt from the earth to the sky, go to sleep Miley Cyrus has a new song, the newest Iphone will sing you songs all day long, the lullaby that takes a lifetime too long,
just stay passive don’t speak of JUSTICE until dust from bombs dropped on Gaza sits

White cloth covers the corpse of a comrade called Mohammed Hussein Saeed Abu Khudair, at 16 occupying the cemetery the creation of a corrupt colonial congregation, could’ve called him my cousin, the white cloth covers his future contributions, cowards pumped gasoline in the blood stream to light his soft skin, pumped adrenaline in the veins to ensure he’s conscious and awake, while the fire on the flesh forces his fate, the smell of skin burning, the sand storm of bombs dropped on the beaches, flesh wounds, butchered pieces

Take a long look in our eyes, we are the insect in your ears, the rust upon your gears, the resistance you fear, the faith you smear, the justice you want to disappear

We are the Palestinian mothers who continue to send their children to school amidst gunfire, children they gave birth to behind a checkpoint, take a long look

We are the shame on the face of a Zionist at the point of realization, the crux of courage to refute the support of a gangster nation, take a long look

We are the tears of a father holding his mangled child in a hospital about to be set to the fire, take a long look

We are the soldier turning against his battalion, the drone operator turned freedom fighter, take a long look

We are the world knocking at your front door come outside and face the bombs you fight for, the guns your taxes afford, the death your cheering citizens SALIVATE for,

So take a long long look into our eyes, justice is frozen in time, FREE FREE PALESTINE!! 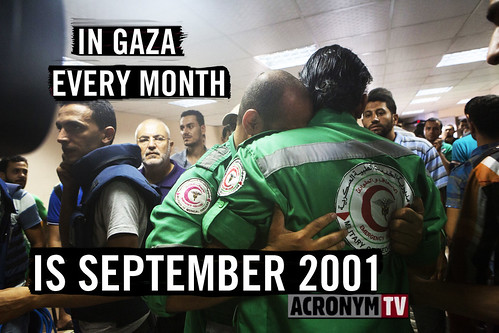