Detroit Water Crisis - a Prelude to the Privatization of Water


Atpeace Makita, a single mother of five children who turned to activism after her water was shut off by the Detroit Water and Sewage Department, talks with Dennis Trainor, Jr. about the Detroit Water Brigade and what it is like to living during the current push for the privatization of the water supply.

Only the Polar Ice Caps contain more fresh water that The Great Lakes.

AtPeace Makita is at the center of a growing wave of activism fighting what the UN has called a clear violation of human rights: “Disconnection of water services because of failure to pay due to lack of means constitutes a violation of the human right to water and other international human rights,” U.N. officials said in a news release. “Because of a high poverty rate and a high unemployment rate, relatively expensive water bills in Detroit are unaffordable for a significant portion of the population.”

“If Detroit can be used as a prototype,” asks Makita “why can’t it happen in LA, Chicago, or New York? On top of the bankruptcy, on top of the foreclosures, on top of the mayoral issues and emergency manager, on top of all of it – now you want to take our life source?”

Under the “stewardship” of emergency management, shutting off the life source of many Detroiters is exactly what is happening.

In March of this year, more than half of all the customers of Detroit Water and Sewage department were more than 60 days delinquent on their water bills.Including businesses, schools and commercial buildings the department has about 323,900 Detroit accounts. As of March 6, nearly 165,000 of those accounts were overdue to the tune of $175 million. There are also more than 296,000 residential accounts –more than 154,000 of which are delinquent for $91.7 million

As Carl Gibson, writing for Occupy.com, points out: “The water shutoffs in Detroit, which is currently in the middle of a bankruptcy fight, are merely a prelude to the outright privatization of water and other public assets. Defenders of Kevyn Orr’s water shutoffs claim that residents need to simply pay their bills to avoid losing their water. Others argue that water infrastructure needs to be paid for – and if it isn’t, the only logical conclusion is that those who don’t pay for the infrastructure will lose their water.”

Makita describes her work with the Detroit Water Brigade, where she serves as Creative Director, as working towards a cultural shift. The system, says Makita, is not working and “we need to create another system that works for all of us.”

Noting that the Detroit t Water and Sewage Department is a public utility that in now under the oversight of an unelected emergency manager, Makita’s message to people outside of Detroit is both a warning and an invitation.

“What if your water is cut off, “ she asks “what if you are not controlling that spigot? Then what?”

AtPeace Makita is the Creative Director of The Detroit Water Brigade. A mother of six children, she is a native Detroiter and an honorable veteran of the U.S. Military. 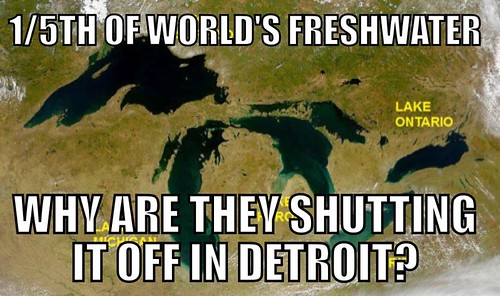