Awareness of, and commitment to the movement of Boycott, Divestment and Sanctions (BDS) is growing both here in the United States and around the world.

“It’s a broad tactic aimed to pressure the state itself to change. But it also reserves a special focus for companies that are actually involved in — and make hefty profits from — occupation policies. These organizations may be forced to pay attention to the boycott very soon — and they may not be the ones you’d expect.”

That was before Operation Protective Edges.  On August 2, The National reported:

“Soros Fund Management, the family office of the billionaire investor George Soros, has sold its stake in SodaStream, the soda making appliance producer that profits from the Israeli occupation of Palestinian territories and was made popular by actress Scarlett Johansson’s endorsement.

The decision comes as a number of big international investors, including the fund linked to the Microsoft founder Bill Gates, join in a burgeoning financial boycott of Israel amid a push by the boycott, divestment and sanctions (BDS) movement and other groups seeking more rights for Palestinians.

SodaStream, headquartered in the Israeli city of Lod, has its main factory in the West Bank settlement of Ma’ale Adumim.

“The broad consensus among Palestinian civil society about the need for a broad and sustained Campaign for Boycott, Divestment and Sanctions (BDS) resulted in the Palestinian Call for boycott, divestment and sanctions against Israel that was launched in July 2005 with the initial endorsement of over 170 Palestinian organizations. The signatories to this call represent the three major components of the Palestinian people: the refugees in exile, Palestinians under occupation in the West Bank and Gaza Strip and the discriminated Palestinian citizens of the Israeli state.”

“We want to make ethical investments and divest from companies that are complicit in the occupation in Palestine, Gaza and the West Bank who profit off of occupation, declares Kash Nikazmrad of Students for Justice in Palestine in this interview with Acronym TV’s Dennis Trainor, Jr. 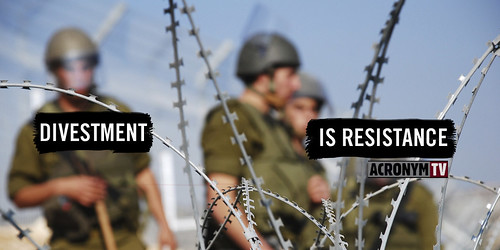 Shouted into the void by The Punk Patriot at 8:59 PM