Transcript |
Texas Governor Rick Perry is on the record with his objective to “make abortion a thing of the past.” Looking at the evidence, it is hard not to come to any other conclusion than the war on women is being won by a radical and regressively religious agenda.

Six states in the nation have only a single abortion clinic left. By September 1st of this year, Texas is likely to have only six abortion clinics operating. The group End Pornography and Patriarchy: The Enslavement and Degradation of Women is embarking on an Abortion Rights Freedom Ride across the state of Texas this August, and the freedom ride has set high expectations for itself, including:

1. To forge a national strategic counter-offensive to what is a national war on women.

2. Radically reset the political, moral, and ideological terms of this fight so that millions understand that this fight is about women’s liberation or women’s enslavement and;

3. Mobilize all people of conscience to wage massive, independent, political resistance. Relying on politicians, and the courts, has not halted the barrage of attacks.

Not all pro-choice advocates are warming to the idea of Stop Patriarchy non-violent, yet highly dramatic and confrontational style and their oft-repeated slogan “Abortion on Demand and Without Apology.”

In preparing for my interview today, I spoke with Diane Derzis (owner of the last abortion clinic in Mississippi). Stop Patriarchy embarked on a Freedom Ride in 2013 and stood side by side with Derzis to help her keep open the only abortion clinic in Texas. She was warned last year herself, she told me, that Stop Patriarchy were too confrontational and were connected to a communist organization.  Diane mentioned that some of these warnings were coming from groups with ties to the Democratic Party. “The communist are coming,” she told me, laughing at the notion before reporting that she did not care what political stripes people wore, just so long they were fighting for a women’s right to maintain control over her body.

For the record, I am a proud signatory, along with Gloria Steinem, Cornel West, Mark Ruffalo, Cindy Sheehan and many others to a statement in support of the Abortion Rights Freedom Ride.

For me, the issue is deeply personal. As a community college student of 19, I impregnated a young woman. Neither of us was in a position to support a child, and- this is the most important thing; she wanted to terminate the pregnancy. We went through the harassment tactics of Randal Terry’s Operation Rescues outside the clinic and a few short years later my first arrest for civil disobedience was with the group Act Up as we shut down the Holland Tunnel in New York City protesting the 1992 Supreme Court Decision Planned Parenthood v. Casey- a huge blow the pro choice community in that it granted states so much freedom to restrict a woman’s right to choice that is directly related to empowering the likes of Gov. Perry in Texas.
It is for these reasons, and the fact that I want my daughter to come of age in a world where she is not a second-class citizen that I stand with Stop Patriarchy in saying Abortion on Demand and Without Apology. 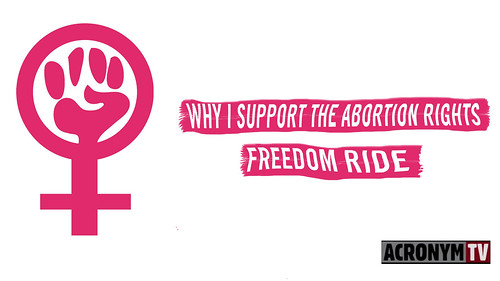