With Mass Incarceration, U.S. is Guilty of a Slow Motion Genocide

If this were happening anywhere else in the world, Americans would be justifiably horrified:

1 out of every 100 adults are living behind bars in the United States, with 1 in 31 in some sort of correctional control, including prison, jail, parole, and probation.

Private prisons are operating around the country at the local and state level, and a majority of them include “occupancy requirements mandating that local or state government keep those facilities between 80 and 100 percent full. In other words, whether crime is rising or falling, the state must keep those beds full.”

The School to Prison Pipeline is still funneling mostly black and brown children into the juvenile and adult criminal legal systems.

Solitary confinement, defined as torture by the UN, is commonly practiced in both Guantanamo Bay prison and in mainland US prisons.

Police can murder suspects, and then claim they shot themselves in the head and get away with it, even if the suspect is handcuffed behind their back.

You get the picture.

According to Carl Dix, the co-founder (along with Cornel West) of The Stop Mass Incarceration Network, all of this and more are tantamount to genocide. As he tells Dennis Trainor, Jr. in the embedded episode of Acronym TV:

“Genocide is not a final act of putting people in gas chambers (…) Genocide is a process. A process by which groups of people are identified, targeted, demonized, separated, and then as this process goes on, the question of mass killings comes up later. That has been going on in this country. Black people in particular have been historically targeted, demonized, segregated (…) the definition of genocide flowing from the United Nations is when a group of people are put (in whole or in part) in circumstances that make it impossible for them to thrive and survive as a people. That is the situation with Mass Incarceration and all of its consequences in this country.”

Joining Carl on the program is Juanita Young. Ms. Young relates her story as the mother of an unarmed young man who was murdered by the NYPD, and how that fuels her life as an anti-police brutality activist.

The two discuss plans for a month of nationwide resistance to Mass incarceration, police terror, repression, and the criminalization of a generation.

The call for an October month of resistance put forth by Dix and Cornel West (and is supported by a growing list of endorsing groups and individuals) states:

“The malignancy of mass incarceration did not arise from a sudden epidemic of crime. Nor did it result from people making poor personal choices. Instead it arose from cold political calculations made in response to the massive and heroic struggle for the rights of Black and other minority peoples that took place in the 1960’s and 70’s, and in response to the enormous economic and social changes brought about by globalized production. This cancer of mass incarceration has been, from the beginning, nothing but a new Jim Crow in place of the old one. Like the old Jim Crow, it drew on, fed off and reinforced the deep-seated roots of the racism that grew up with slavery. Like the old Jim Crow, it has been, from the beginning, unjustifiable, utterly immoral and thoroughly illegitimate…

It is not enough to oppose this in the privacy of your own conscience or the company of like-minded people. It is not enough to curse this out, but then tell yourself nothing can be done. If you live your life under this threat, you MUST act. If you understand how wrong this is and how much it devastates the lives of so many millions, you MUST act.” 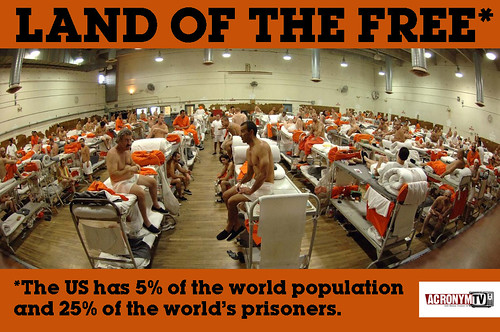 Shouted into the void by The Punk Patriot at 12:21 AM