Orange is the New Black (Genocide)
Originally Posted at PopularResistance.org

“Genocide is a process. A process by which groups of people are identified, targeted, demonized, separated, and then as this process goes on, the question of mass killings comes up later. That has been going on in this country. Black people in particular have been historically targeted, demonized, segregated (…) the definition of genocide flowing from the United Nations is when a group of people are put (in whole or in part) in circumstances that make it impossible for them to thrive and survive as a people. That is the situation with Mass Incarceration and all of its consequences in this country.”

Carl, the co-founder of the Stop Mass Incarceration Network, appeared on Acronym TV with Dennis Trainor, Jr alongside Juantia Young (the mother of Malcolm Ferguson, who was murdered by the NYPD) to discuss plans for a month of nationwide resistance to Mass Incarceration.

The organizers call to action for October of 2014 (which is endorsed by Acronym TV) reads:


A CALL FOR A MONTH OF RESISTANCE TO MASS INCARCERATION, POLICE TERROR, REPRESSION AND THE CRIMINALIZATION OF A GENERATION!

For 2 generations, Black and Latina/Latino youth in the U.S. have been shipped off to prison in numbers never before seen anywhere in the world at any time. More than 2 million people, of all nationalities languish in prison -- ten times the number 50 years ago. The U.S. has 5% of the world’s population but 25% of the world’s prison population! More than 60% of those in U.S. prisons are Black or Latina/o. 32% of Black men between the ages of 20 and 29 are in prison or on parole or probation on any given day. More than 80,000 people in prison are held in solitary confinement under conditions that fit the international definition of torture.

The incarceration of women has increased by 800% over the last 30 years. They, along with those whose sexual orientation is not “mainstream” or who are gender non-conforming -- lesbian, gay, bisexual, transgender and intersex prisoners -- face extremely harsh and abusive treatment in prison, including widespread rape. Alongside this has risen a massive program of criminally prosecuting undocumented immigrants, essentially hidden from public view. As a result of the devastation of their homelands, these immigrants have been driven to this country to work without papers, and today they are being criminalized. The US chastises other countries for human rights violations, yet it enmeshes the lives of tens of millions of people in its criminal “injustice” system. The courts, cops, prisons and La Migra all play a part in enforcing mass incarceration. There are genocidal aspects and a genocidal logic to this program, and it has been gathering momentum. All this is intolerable, and, if it isn’t stopped, it will get much worse!

Mass incarceration has grown beside the criminalization of whole peoples; a situation in which every African-American or Latina/o is a permanent suspect – treated as guilty until proven innocent by police and racist vigilantes, if they can survive to prove their innocence. This is especially concentrated among the youth, starting with cops in schools, arresting children for things that used to mean a visit to the principal’s office at worse, putting youth on a trajectory from school to prison. Black and Latina/o youth have a target on their backs in this society. Literally tens of millions of lives have been scarred and worse – both the direct victims and their families and communities. People who heroically resisted these and other injustices have been imprisoned, some of them for decades. These political prisoners must be freed.

The malignancy of mass incarceration did not arise from a sudden epidemic of crime. Nor did it result from people making poor personal choices. Instead it arose from cold political calculations made in response to the massive and heroic struggle for the rights of Black and other minority peoples that took place in the 1960’s and 70’s, and in response to the enormous economic and social changes brought about by globalized production. This cancer of mass incarceration has been, from the beginning, nothing but a new Jim Crow in place of the old one. Like the old Jim Crow, it drew on, fed off and reinforced the deep-seated roots of the racism that grew up with slavery. Like the old Jim Crow, it has been, from the beginning, unjustifiable, utterly immoral and thoroughly illegitimate.


This must stop – NOW! Not the next generation, not in ten years, not any time off in some promised future that never seems to come. NOW!

But it will not stop unless and until millions of people, of all nationalities, stand up and say NO MORE, in unmistakable terms. The history of this and every other country shows that without struggle, there can be no positive change; but with struggle this kind of change becomes possible.

It is not enough to oppose this in the privacy of your own conscience or the company of like -- minded people. It is not enough to curse this out, but then tell yourself nothing can be done. If you live your life under this threat, you MUST act. If you understand how wrong this is and how much it devastates the lives of so many millions, you MUST act.

NOW is the time to act. People are beginning to awaken and stir. Resistance has begun: Heroic hunger strikes by people in prisons and detention centers and outpourings in response to murders by police and racist vigilantes. Prisoners in solitary confinement in California declared a cessation of racial hostilities as Black, Latino and white prisoners came together to resist the torture of solitary confinement. All this must be taken to a much higher level. We call for a massive Month of Resistance to Mass Incarceration in October of this year; a Month that can impact all of society; one that can open the eyes of millions of people to the need to end this new Jim Crow.

In October, 2014, our resistance to mass incarceration must reverberate across the country and around the world. There must be powerful demonstrations nationwide on October 22, the National Day of Protest to Stop Police Brutality, Repression and the Criminalization of a Generation. Throughout October there must be panels and symposiums on campuses and in neighborhoods; major concerts and other cultural expressions; ferment in the faith communities, and more -- all aimed at taking the movement to STOP mass incarceration to a much higher level. October, 2014, must be a month that makes clear that thousands and thousands are willing to stand up and speak out today and to awaken and rally forth millions. It must be the beginning of the end of the mass incarceration in the U.S. To that end: 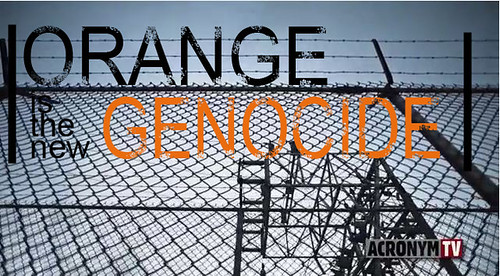 Shouted into the void by The Punk Patriot at 12:27 AM