A Single Woman Who Likes Sex! Or; Reclaiming the Morality of Abortion

In 2008, the Democratic party dropped its language dropped its old abortion language ("safe, legal and rare"), which had asked that women not have abortions unless they absolutely must, and changed the official platform.

In other words, it stopped patronizing women into feeling like Abortion is something they should apologize for. Instead, the Democratic party position now reads: "The Democratic Party strongly and unequivocally supports Roe v. Wade and a woman's right to choose a safe and legal abortion, regardless of ability to pay, and we oppose any and all efforts to weaken or undermine that right."

The group Stop Patriarchy takes this a few steps further, declaring that women should have access to abortion on demand and without apology:

“Abortion is an issue that divides this country. This is no accident. How one thinks and feels about abortion flows fundamentally from how one views women.

We recognize that women are full human beings who must have the right – through unrestricted and unstigmatized access to birth control and abortion – to decide for themselves when and whether they will have children. We reject the view that a woman's highest purpose and fundamental “duty” is to bear children, even those she does not want or cannot care for.

For decades, a movement which calls itself “pro-life” has unleashed violence against abortion providers, shamed and humiliated women, and relentlessly restricted access to abortion, especially for poor women.

Over 80% of abortion clinics have experienced violence, threats, or harassment; eight doctors and staff have been murdered. Today, 97% of rural counties have no abortion provider. One in four poor women who seeks an abortion cannot afford it and is forced to have a child she does not want. Five states have only one abortion clinic left.”

Two women who came out of the “Abortion closet” – Katie Klabusich and Kelly Carlin, join host Dennis Trainor, Jr. to discuss what the world would look like if women were not forced to apologize for abortions.

Katie Klabusich emphasized reclaiming the morality argument from the “bumper sticker right. Whether that means (shouting) abortion on demand without apology, or just walking around saying: I’m single, and I enjoy sex, and I will not apologize for that either! Whatever it is, there is a place within this movement for you.” 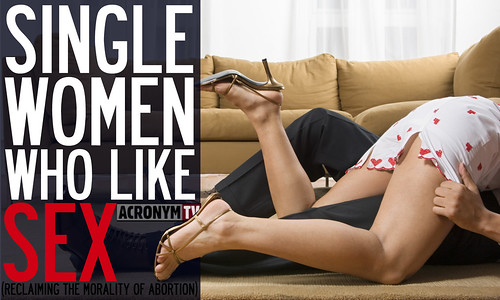 Shouted into the void by The Punk Patriot at 3:29 PM