Discussed in this episode: Ayahuasca as a Cure for Amber Lyon’s PTSD, Psilocybin as a Possible Cure for Dennis Trainor Jr.’s ‘Anger Issues’, Reset.Me, Corruption at CNN, BP Oil Spill, Saving the World Through Self Improvement, DMT, LSD, Indie Media, The Healing Power of Psychedelics

Amber Lyon, a 3 time Emmy Award winning journalist joins me to discuss her radical life and career shift; one she found through the life altering experience using and researching Ayahuasca and otherPsychedelics. Lyon states too many of us are carrying around bottled up trauma that manifests itself as anxiety, depression, unhappiness, anger, fear, corruption, greed, or violence. Psychedelic medicines are some of the most profound substances on earth for enabling one to process and purge trauma. Lyon says if we can each heal our wounds at the individual level, we will witness dramatic positive transformations as a whole.

Amber is poised to launch a new website, Reset.me, which

"strives to provide accurate journalism on psychedelics and alternative therapies for depression, anxiety, stress, PTSD, addiction, and other health conditions.   We seek to give those who need to hit the 'reset' button in life information for improving mental and physical well-being. Through the aggregation of content and production of independent journalism by experienced reporters, Reset.Me aims to create an open discussion surrounding psychedelics and alternative therapies."

Of all of the subjects we have covered since Acronym TV shifted format, Psychedelics is – by far- the subject I know the least about. For people predisposed to cynicism (and I can be one of them) this subjects covered here can be easily dismissed as having little or no relevance to the myriad global problems brought of by the crisis that is capitalism. However, Amber Lyon’s thoughtful and researched presentation are enough to give one pause and reconsider anew the quote attributed to Albert Einstein: “The world as we have created it is a process of our thinking. It cannot be changed without changing our thinking.”

Lyon was honored with a prestigious Gracie Award for women in media and a nominated as a finalist for a Livingston Award for Young Journalists.

Lyon is also the author of the 2013 Amazon bestseller, Peace, Love and Pepper Spray, a historic photographic documentation of protest across the United States 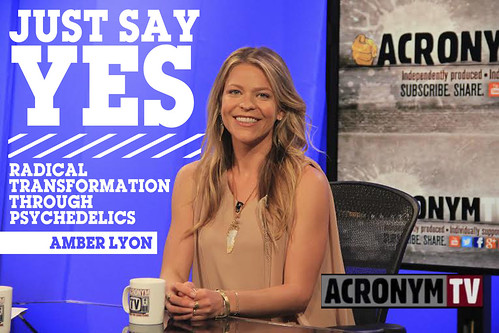 Shouted into the void by The Punk Patriot at 12:04 AM