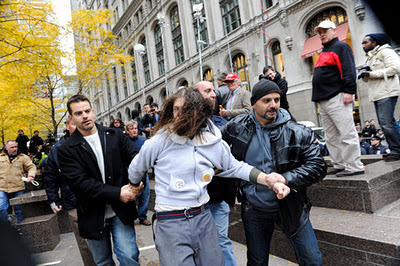 The Plainclothes Officer on the left is the man who @LukeRudkowski videotaped after being punched in the stomach by him.

This is a common police tactic, in which plainclothes cops assault peaceful protesters in an attempt to spur them to violence, giving the police the excuse they need to legitimately (in the public's eye) start mass arrests.

They tried performing Mass Arrests earlier today, but ended up quitting half way through when they were unable to spur #OWS protesters to violence.

#OWS Stay strong.
SOLIDARITY
Shouted into the void by The Punk Patriot at 2:36 PM