Tax the Rich, Tax them now, before it's too late

So MarketWatch is saying what I've been saying for a while now:

If we don't start taxing the super-rich, the rest of us are going to have no other option but to eat them.

It's a gory, distasteful thought, I know. As a lazy vegetarian, and a person with an irrational fear of cannibalism, the idea disgusts and appauls me, and it was my thought. But the world works according to certain laws, and when the majority of people have nothing to eat, and the super-rich have more money than we could spend in our entire lives, somebody is going to get eaten, and it's going to be the person with the gym membership and the gasoline guzzling Cadillac Escalade in their driveway. That's just how these things work. Hungry people do terrible things.

Tax the Super Rich now or face a revolution

by PAUL B. FARRELL

Revolutions build over long periods — to critical mass, a flash point. Then they ignite suddenly, unpredictably. Like Egypt, started on a young Google executive’s Facebook page. Then it goes viral, raging uncontrollably. Can’t be stopped. Here in America the set-up is our nation’s pervasive “Super-Rich Delusion.”

We know the Super Rich don’t care. Not about you. Nor the American public. They can’t see. Can’t hear. Stay trapped in their Forbes-400 bubble. An echo chamber that isolates them. They see the public as faceless workers, customers, taxpayers. See GOP power on the ascent. Reaganomics is back. Unions on the run. Clueless masses are easily manipulated.

Even Obama is secretly working with the GOP, will never touch his Super Rich donors. Yes, the Super-Rich Delusion is that powerful, infecting all America.

Here’s how one savvy insider who knows described this Super-Rich Delusion: “The top 1% live privileged lives, aren’t worried about much. Families vacation at the best resorts. Their big concerns are finding the best Pilates teacher, best masseuse, best surgeons, best private schools. They aren’t concerned with the underlying deterioration of America or the world, except in the abstract, because they aren’t directly affected by it. That’s not to say they aren’t sympathetic, aware, or don’t talk about the issues you bring up. They are largely concerned with protecting and enhancing their socio-economic positions, ensuring their families live well. And nothing you write about will change things.”

Our top 1% honestly believe they’re immune, protected from the unintended consequences of beating down average Americans for three decades with the free-market, trickle-down Reaganomics doctrines that made them Super Rich.

They honestly believe those same doctrines will protect them in the next depression. Why? Because they have megabucks stashed away. Provisions for the long haul. Live in gated compounds with mercenaries guarding them.

They believe they’ll continue living just fine in a depression. But you won’t. Nor will your retirement. Neither will the rest of America. And still the Super Rich don’t care, “except in the abstract, because they aren’t directly affected.”

Warning: The Super-Rich Delusion has pushed us to the edge of a great precipice: Remember the Roaring Twenties? The Crash of 1929? Great Depression? Just days before the crash one leading economist, Irving Fisher, predicted that stocks had “reached what looks like a permanently high plateau.”

Yes, he was trapped in the “Great Gatsby Syndrome,” an earlier version of today’s Super-Rich Delusion. It was so blinding in 1929 that the president, Wall Street, all America were sucked in … until the critical mass hit a mysterious flash point, triggering the crash.

Yes, we’re reliving that past — never learn, can’t hear. And oddly it’s not just the GOP’s overreach, the endlessly compromising Obama, too-greedy-to-fail Wall Street banksters, U.S. Chamber of Commerce billionaires and arrogant Forbes 400. America’s entire political, financial and economic psyche is infected, as if our DNA has been rewired.

The Collective American Brain is trapped in this Super-Rich Delusion, replaying the run-up to the ’29 Crash.

Nobody predicted 2011 revolutions in the oil-rich Arab world either

Warning: Mubarak, Gaddafi, Ali, Assad, even the Saudis also lived in the Super-Rich Delusion. Have for a long time. Were vulnerable. Ripe for a revolution. They, too, honestly believed they were divinely protected, chosen for great earthly wealth, enjoyed great armies.

Then, suddenly, out of the blue, a new “educated, unemployed and frustrated” generation turned on them, is now rebelling, demanding their share of economic benefits, opportunities, triggering revolutions, seeking retribution.

Still, you don’t believe there’s a depression ahead here in America? The third great market crash of the 21st century? A new economic revolution about to blow up in our faces? No, you don’t believe, can’t believe … you, me, we are all infected by the Super-Rich Delusion, just as Americans were in the Roaring Twenties.

Check the stats folks: The last time America’s wealth gap between the Super Rich and the other 99% was this big was just before the 1929 Crash and the Great Depression.

You can’t remember? Or you won’t? America is trapped in “terminal denial,” a setup for failure. Too many still live in the false hope of this Super-Rich Delusion. Do you believe government stats hyping a recovery? Believe Wall Street’s nonsense about a new bull market ahead? Believe Exxon-Mobile’s misleading ads about energy stocks. Believe Bill Gross’ when he says dump Treasurys, and buy his emerging country bonds? Dream on.

Start preparing for the third meltdown of the 21st Century, and depression

Denial and lies. Remember, 93% of what you hear about markets, finance and the economy are guesses, wishful thinking and lies intended to manipulate you into making decisions that suck money from your pockets into Wall Street. They get rich telling lies about securities. They hate any SEC fiduciary rules forcing them to tell the truth.

But the fact is, on an inflation-adjusted basis, Wall Street lost 20% of your retirement money in the decade from 2000 to 2010, over $10 trillion. And “Irrational Exuberance’s” Robert Shiller warns of a third meltdown coming. You better start preparing now.

Before you start betting any more at Wall Street’s rigged casinos, think long and hard about these six megatoxins lurking in America’s Super-Rich Delusion, a mind-altering pandemic infecting our nation’s leadership in Washington, Corporate America and Wall Street … but also “trickling down,” infecting many Americans. Listen:

Bloomberg warns: “The Kids Are Not Alright.” Worldwide, youth unemployment is fueling the revolution. In a New York Times column, Matthew Klein, a 24-year-old Council on Foreign Relations researcher, draws a parallel between the 25% unemployment among Egypt’s young revolutionaries and the 21% for young American workers: “The young will bear the brunt of the pain” as governments rebalance budgets. Taxes on workers will be raised and spending on education will be cut while mortgage subsidies and entitlements for the elderly are untouchable,” as will tax cuts for the rich. Opportunities lost. “How much longer until the rest of the rich world” explodes like Egypt?

2. Warning: rich get richer on commodity prices, poor get angrier

USA Today’s John Waggoner warns: “Soaring food prices send millions into poverty, hunger: Corn up 52% in 12 months. Sugar 60%. Soybeans 41%. Wheat 24%. For 44 million the “rise in food prices means a descent into extreme poverty and hunger, warns the World Bank.” Many causes: Speculators. Soaring oil prices. Trade policies. Population explosion. But altogether they expose “the underlying inequalities and issues related to the standard of living that boil beneath the surface,” says a Pimco manager.

A Time special report, “Poor vs. Rich: A New Global Conflict” warned that a “conflict between two worlds — one rich, one poor — is developing, and the battlefield is the globe itself.” Just 25 developed nations of 750 million citizens consume most of the world’s resources, produce most of its manufactured goods and enjoy history’s highest standard of living.” But they’re now facing 100 underdeveloped poor nations with 2 billion people with hundreds of millions living in poverty all demanding “an ever larger share of that wealth.” Think Egypt. British leader calls this a “time bomb for the human race.”

We are ripe for one: In “Third World America” Arianna Huffington warns: “Washington rushed to the rescue of Wall Street but forgot about Main Street … One in five Americans unemployed or underemployed. One in nine families unable to make the minimum payment on their credit cards. One in eight mortgages in default or foreclosure. One in eight Americans on food stamps. Upward mobility has always been at the center of the American Dream … that promise has been broken… The American Dream is becoming a nightmare.” Soon it will implode. a meltdown, revolution, depression.

5. Warning: Super Rich must be detoxed of their greed addiction

In “Free Lunch: How the Wealthiest Americans Enrich Themselves at Government Expense (And Stick You With the Bill),” David Cay Johnston, warns that the rich are like addicts, and to “the addicted, money is like cocaine, too much is never enough.” A few years ago an elite 300,000 Americans in “the top tenth of 1% of income had nearly as much income as all 150 million Americans who make up the economic lower half of our population.” The Super Rich Delusion is an addiction that requires a painful detox.

In “Washington’s Suicide Pact,” Newsweek’s Ezra Klein warns: “Congress is careening toward the worst of all worlds: massive job losses and an exploding deficit.” How bad? As many as 700,000 more jobs lost, says Moody’s chief economist, Mark Zandi. What a twist: Remember vice president Dick Cheney said “deficits don’t matter.” Today the GOP is so blinded by its obsession to destroy Obama’s presidency, deficits are now the only thing they say matters.

Wake up folks. The Super-Rich Delusion is destroying the American Dream for the rest of us. The Super Rich don’t care about you. They’re already stockpiling for the economic time bomb dead ahead. Don’t say you weren’t warned. Time for you to plan ahead for the coming revolution, for another depression.

Funny, this article seems to be saying exactly what Davis Fleetwood expressed in this video:


GET A SHIRT, SPREAD THE WORD: 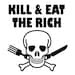 Shouted into the void by The Punk Patriot at 2:59 AM

Email ThisBlogThis!Share to TwitterShare to FacebookShare to Pinterest
Labels: kill and eat the rich, tax cuts, tax the rich