Much like the oil that is spewing from the earth and poisoning the sea and land, BP has been spewing lies and poisoning public discourse.
First they lied about being a Green Company, rebranding as "Beyond Petroleum" after an explosion in a Texas Oil Refinery killed 15 employees, injured more than 170, and released.
They faked their blowout preventer tests on the Deepwater Horizon.
They lied about their preparedness to deal with an oil spill resulting from their drilling.
Then when the Deepwater Horizon went down, they lied about the amount of oil that was spilling from the wellhead. First it was 1,000 barrels a day, then 5,000. We know now that it was likely 60,000 barrels a day, and could have been as much as 100,000 barrels a day.
Then they lied to the press about their safety record.
Then they lied about their cleanup efforts, busing in actors to play the part of oil cleanup extras as a backdrop for Obama's visit.
Now as a patina on this veneer of lies, it turns out that their Crisis Command Center was >built in Photoshop.

1) Why were the screens in the crisis center blank in the middle of the crisis? Coffee break?
2) The BP spokesman claims that the photographer photoshopped the changes. Really? A professional photographer hired by BP Photoshops so poorly that a 12 year old kid could do a better job. Really? Let me show you what BP said exactly, and then the photo that supposedly this "professional" edited:

Scott Dean, a spokesman for BP, said that there was nothing sinister in the photo alteration and provided the original unaltered version. He said that a photographer working for the company had inserted the three images in spots where the video screens were blank.

Now here is the Photoshop job that the "professional" photographer did - this is just one part of the photo that he screwed up: 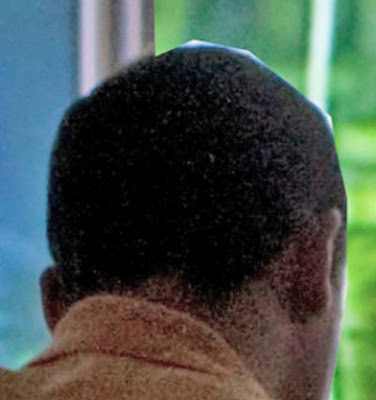 Anyone who has ever used Photoshop knows that this is an incredibly amateur job. I can do far better than this, and I tend to play with Photoshop for fun. We're to believe that a professional photographer did this poor a job, for pay, for a huge corporate client? Really? No one would hire this photographer again if this is true. Oh, and the photographer added the fake screens to the photo, what, without BP's permission? That's what they're implying, "the photographer did it."

UPDATE: The photo contains data suggesting it was taken in 2001, not July of 2010 as claimed on BP's Web site. That would suggest, at least one possibility is, that BP took an old photo and Photoshopped new pictures of the oil spill over it, to make it look "new." More on this at the end of the post.

Original BP Photo that is linked off of this page, with a snippet of the photo: 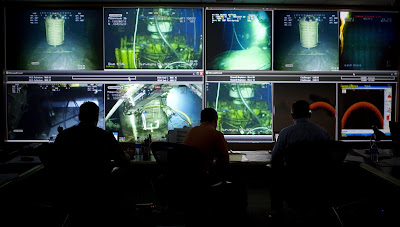 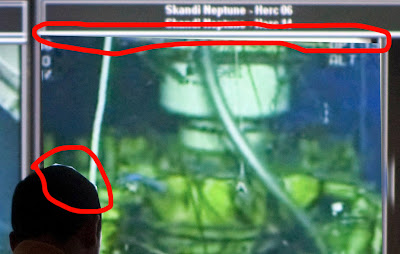 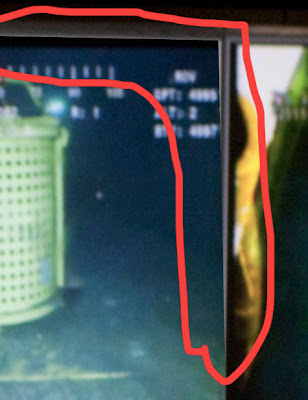 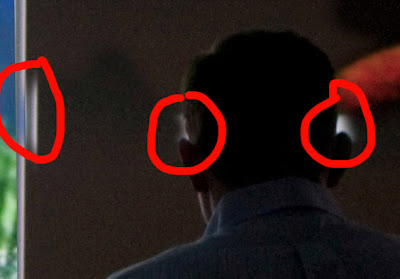 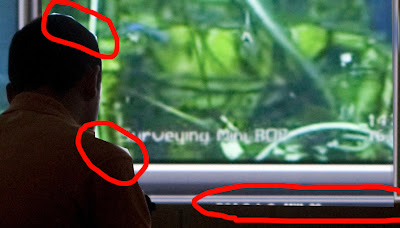 ... [A]n astute reader noticed that the meta info for the photo says it was created in 2001, not July 16, 2010 as claimed on BP's site. It looks like BP took a photo from 2001, and in order to make it look like the command center in July of 2010, they pasted pictures of the oil well leaking over the old photo. 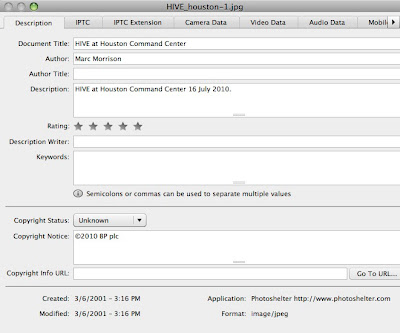 Since AmericaBlog posted this article, the Washington Post also picked up on this news nugget, and posted a back and forth analysis between the shitty photoshop job, and what BP claims is the original photo.

In reality, the fact that BP has lied about yet another thing, and an inconsequential one at that, shouldn't be surprising. What's surprising is that even though we keep catching them, even though nobody trusts them anymore, they STILL KEEP LYING.

The fact that they are lying about such inconsequential things makes me think of a dying animal desperately thrashing about. For their own sake, I say it's time for a mercy kill.
Shouted into the void by The Punk Patriot at 11:47 PM