Medea Benjamin, the co-founder of Code Pink, sits down with Dennis Trainor, Jr. of Acronym TV on the eve of the largest Climate march in history to discuss the climate justice. “”If you care about the planet, you care about people, workers, immigrants, and you care about whether we are destroying the planet whether by polluting or by polluting through war, says Benjamin, who went on to describe the founding of Code Pink as a climate Justice group. “We started as a group of women who came together around the environment.  We were called Unreasonable Women for the planet.”

Benjamin and Code Pink have regularly disrupted Senate hearings on ISIS/ ISIL of late, but being part of the People’s Climate March is not something she would miss: “It is all interconnected,” she told me “and I don’t think we have the ability anymore to divide ourselves into these (separate) silos.” 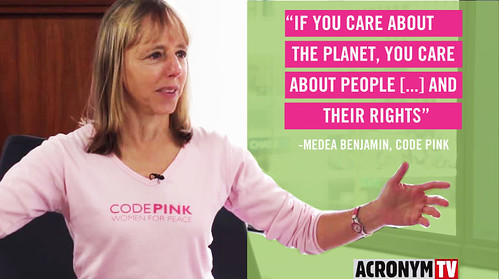 Shouted into the void by The Punk Patriot at 10:35 PM