Slaughter the Planet or Exterminate Capitalism? Time To Choose.

Humanity is flying headlong over a climate cliff  and reversing course does not project to be very profitable for the global elite.

So, without a growing number of us holding their feet to the ever warming fire, a much need reversal will not happen and the corporately controlled main stream media will continue to portray this topic as one where there are two sides to the story. Consider this typical news copy, filed by the AP, describing the 2012 UN Climate meeting, “the two decade old talks have not fulfilled their main purpose, reducing the greenhouse gas emission that scientists say are warming the earth.” (Emphasis added)

What is that extraneous phrase always included – “that scientists say” included as a qualifier? I mean, it is not as if the AP would, in captioning a satellite picture of Earth, would write, “here is a picture of the planet earth, which scientists say is not flat.”

To make matters worse, the worst offenders will be the last to suffer the consequences. One of the main stated goals of last year’s conference was finding ways to raise climate aid for poor countries at a time when budgets are strained by financial turmoil.  Tim Gore of Oxfam said developing countries, including island nations for whom rising sea levels pose a threat to their existence, stand before a "climate fiscal cliff." and said "So what we need for those countries are firm commitments from rich countries to keep giving money to help them to adapt to climate change.”

In summary: The parties to the UN Climate conference represent governments whose policies and philosophies enable crimes against the environment that have and will continue to cause devastation of the ecological, moral and financial variety to the quote developing countries who do not possess the infrastructure or the wherewithal to contribute to Sodom and Gomorrah show that us developed countries are visiting upon the planet, and will present an existential threat to the less developed countries actual existence, so we will pay them reparations. We all agree that we owe them reparations, I mean, our way of life, to channel Dr. Suess for a moment, our biggering and biggering and biggering turning more Truffala trees into thneeds that everyone NEEDS, is now or will in the not too distant future, literally killing people in less developed countries who are not so busy building thneeds that everyone needs.

So, in addition to destroying the ecosystem and straining to hold up the house of cards that is the global Hyper capitalist financial system, we are thinking that things might get down right scary in a mad max kind of way so we might want to prioritize helping the victims in developing countries who suffer or will suffer the homicidal side effects of our lifestyle. But actually change our lifestyle? No, silly. That’s not on the table, is it?

Question, and again, I am no expert on the subject, but is Capitalism compatible with the health and survival of all of the living things on this rock we call Earth? 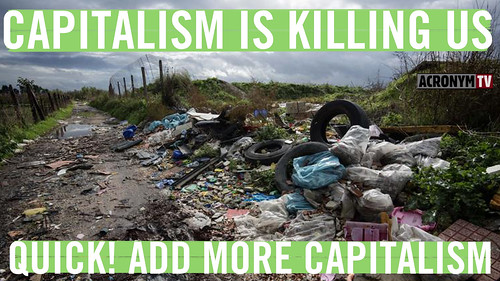 Shouted into the void by The Punk Patriot at 10:58 PM