Howie Hawkins, Green Party Candidate for N.Y. Governor, sits down with Dennis Trainor, Jr. of Acronym TV on the eve of the largest Climate march in history to discuss his campaign.

The richest 1% own the two major parties. It's time working people had one of our own.

That's why I'm running for Governor. My name is Howie Hawkins. I'm a working Teamster and my running mate, Brian Jones, is a teacher and union member.

New York has the greatest income inequality in the country -- and it has gotten worse under Governor Cuomo's tax breaks for the rich and spending cuts for the rest of us. Our schools are the most segregated in the nation. Poverty is on the rise in cities across the state. It doesn't have to be this way. We can create an economy that meets human needs and protects our planet. (read more: http://www.howiehawkins.org/) 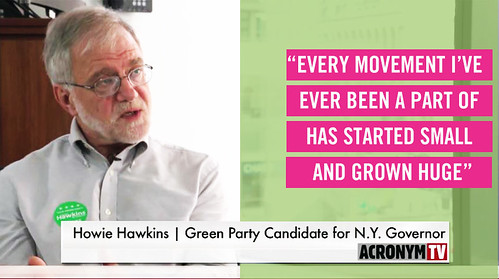 Shouted into the void by The Punk Patriot at 10:01 PM