Save the Climate or Save Capitalism? | #FloodWallStreet Dispatch

***
The positive momentum generated by the People’s Climate Parade spilled over into a massive direct action on Monday.

Flood Wall Street exceeded organizers expectations, with over 3000 people shutting down Broadway between Exchange place and the iconic Wall Street Bull for eight hours just one day ahead of the 2014 UN Climate meeting.

What is clear after covering Sunday’s parade and Monday’s action is not that we need an either or approach. One does not have to dismiss the march as unimportant or irrelevant; it generated headlines, it has people talking, but without more and more people putting their bodies on the line like the 102 arrested during the flood wall street actions, you can fill tomorrow and tomorrow and tomorrow with marches and parades and it will be full of sound and fury. Signifying nothing. 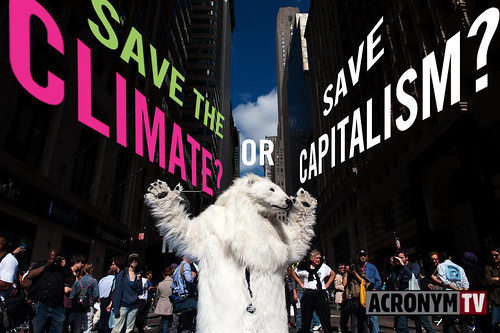 Shouted into the void by The Punk Patriot at 10:41 PM