Going Postal To Save The United States Post Office

If you had a great job that paid really well, but your health insurance benefits from that job had to be paid in full for 75 years into the future, it wouldn’t matter how much you got paid because you would always be broke and in debt.

The same thing is happening to the United States Postal Service.

The USPS is NOT in trouble. Despite the doom and gloom trumpeted by the corporate media, the post office actually posted $700 million in operation profits in the last four years.

The USPS is certainly in a crisis, but it doesn’t have anything to do with the post office’s facilities, online commerce or employee salaries. It should come as a surprise to nobody that the USPS’s dire financial situation is a direct result of the callousness and shortsightedness of Congress. Luckily, there’s a way we can all help the post office generate more revenue while simultaneously bleeding the banks dry one envelope at a time. But I’ll get to that in a minute.

The reason the U.S. Postal Service is running at constant losses and having to shutter offices around the country is a direct result of the Postal Reform and Accountability Act (PRAA) of 2006. The bill was passed by the same lame duck Congress that got their asses handed to them in the 2006 mid-term elections, amidst a wave of populist anti-war anger that mobilized millions of voters to throw the war hawks out of Congress. 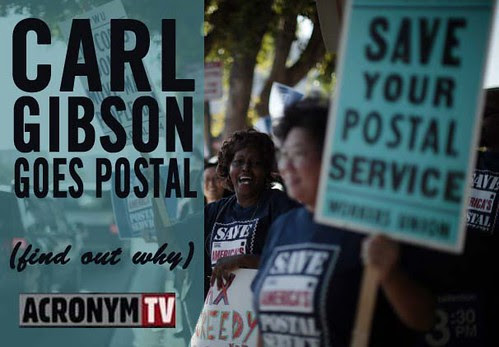 Shouted into the void by The Punk Patriot at 8:09 PM