The TPP is a Trojan horse that seeks to usher in a backroom secret sweetheart deal for the global elite, and President Barack Obama wants the deal fast-tracked through Congress. That effort was dealt a serious blow on Wednesday, when WikiLeaks released the secret negotiated draft text for the entire Trans-Pacific Partnership Intellectual Property rights chapter. According to the WikiLeaks press release:

“The WikiLeaks release of the text comes ahead of the decisive TPP Chief Negotiators summit in Salt Lake City, Utah, on 19-24 November 2013. The chapter published by WikiLeaks is perhaps the most controversial chapter of the TPP due to its wide-ranging effects on medicines, publishers, internet services, civil liberties and biological patents.”

Remember the concept of Corporate Personhood from the Citizens United case?

The TPP combines all of the worst elements of NAFTA and Citizens United, shoots them up with steroids, sprinkles in a speedball and codifies these principles into a trade agreement that is in fact much more than a trade agreement. 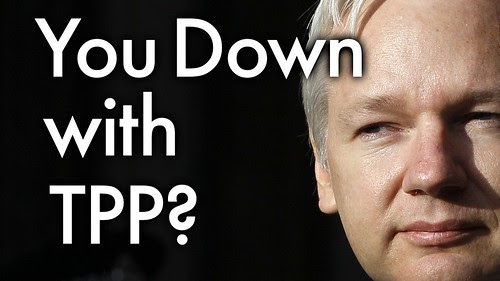