Was sending #occupywallst protesters onto the bridge an NYPD arrest tactic?

What I'm hearing from people on the ground, is that police were actually directing the Occupy Wall Street protesters onto the traffic lanes, where they were corralled with orange netting, detained, and placed onto buses.

I don't know if this is true, or just a rumor that is circulating and a large contingent of protesters actually intended to shut down Brooklyn-bound traffic. From The New York Times:

“Protesters who used the Brooklyn Bridge walkway were not arrested,” said the head police spokesman, Paul J. Browne. “Those who took over the Brooklyn-bound roadway, and impeded vehicle traffic, were arrested.”

But many protesters said that they thought the police had tricked and trapped them, allowing them onto the bridge and even escorting them across, only to surround them in orange netting after hundreds of them had entered.

“The cops watched and did nothing, indeed, seemed to guide us onto the roadway,” said Jesse A. Myerson, a media coordinator for Occupy Wall Street who was in the march but was not arrested.

There were no physical barriers, though, and at one point, the marchers began walking up the roadway with the police commanders in front of them – seeming, from a distance, as if they were leading the way. The Chief of Department Joseph J. Esposito, and a horde of other white-shirted commanders, were among them.

After allowing the protesters to walk about a third of the way to Brooklyn, the police then cut the marchers off and surrounded them with orange nets on both sides, trapping hundreds of people, said Mr. Dunn. As protesters at times chanted “white shirts, white shirts,” officers began making arrests, at one point plunging briefly into the crowd to grab a man.

The police said that those arrested were taken to several police stations and were being charged with disorderly conduct, at a minimum.

Etan Ben-Ami, 56, a psychotherapist from Brooklyn who was up on the walkway, said that the police seemed to make a conscious decision to allow the protesters to claim the road. “They weren’t pushed back,” he said. “It seemed that they moved at the same time.”

Mr. Ben-Ami said he left the walkway and joined the crowd on the road. “It seemed completely permitted,” he said. “There wasn’t a single policeman saying ‘don’t do this’.”

He added: “We thought they were escorting us because they wanted us to be safe.” He left the bridge when he saw officers unrolling the nets as they prepared to make arrests.

It seems to me like protesters were in fact told by the NYPD to use the roadway, or at least led to believe that it was okay.

This eyewitness account of the arrests provides more mounting evidence that the police premeditatedly allowed the protesters onto the bridge, with the intent to trap and detain them.

"It seemed to me that the police did nothing to stop the protesters and it would have been very easy for them to guide all of us onto the walkway. As it was, they were guiding the march and traffic and I neither saw nor heard any resistance from the cops on the scene.

And there were a LOT of them. More than enough to have kept us off the road."

Photographic evidence of a shitload of cops waiting on the sidewalk, doing nothing to stop people from entering the roadway

"And then we all stopped. The people on the walkway stopped to watch the people on the road. Those on the road looked like they had been stopped by a whole lot of cops and those, now infamous, orange cordons. At no point did I hear anyone talk about not crossing the bridge. Also, the fact that no one was directing us to stay on the road (or off it, for that matter) suggests to me that the point was to cross, not stop, and the police interfered."

"At the time of this posting, hundreds of Occupy Wall Street protesters, members of the press and bystanders are being penned by the police on the Brooklyn Bridge, waiting to get arrested one by one. (The livestream is in the previous post.) According to eyewitnesses, the NYPD closed the bridge to traffic as the surge of protesters arrived, but then used the crowd's presence on the roadway to corral them in on both sides, so that no exit is possible."

"They're arresting us one by one. I just asked a cop and they said they're going to arrest all of us. There are hundreds of people who dont have room to sit down. We're just clammed in."

UPDATE FROM THE FREE CHANGE COLLECTIVE


A member of Free Change Collective has been arrested twice, the first time he was arrested for no reason, the second time for being in the traffic lane of the Brooklyn bridge. He may be detained until his scheduled court hearing, which is months from now.


VIDEO of the Brooklyn Bridge Arrests From The Free Change Collective:

The Brooklyn Bridge Arrests AS THEY HAPPEN

The Police releasing the "fancy" Media:

And now some more pics of the event on the Brooklyn Bridge: 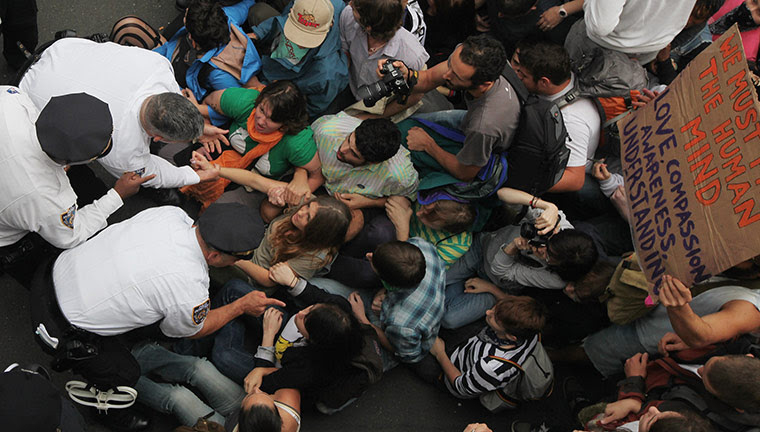 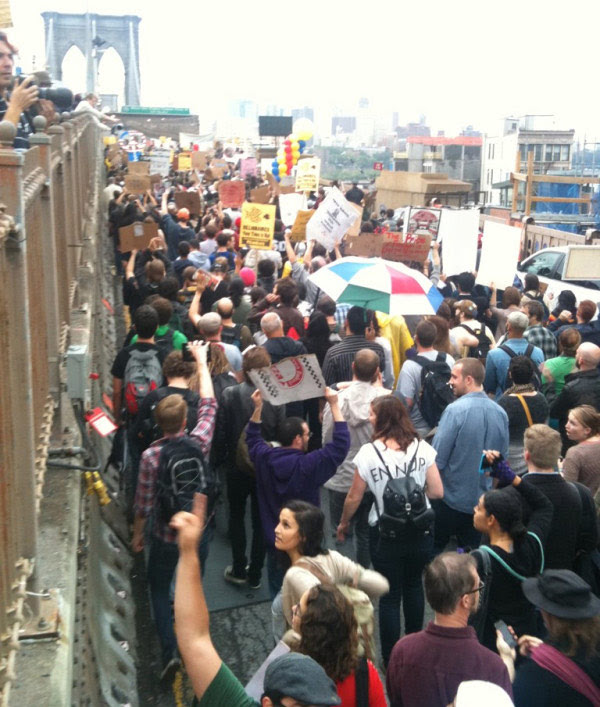 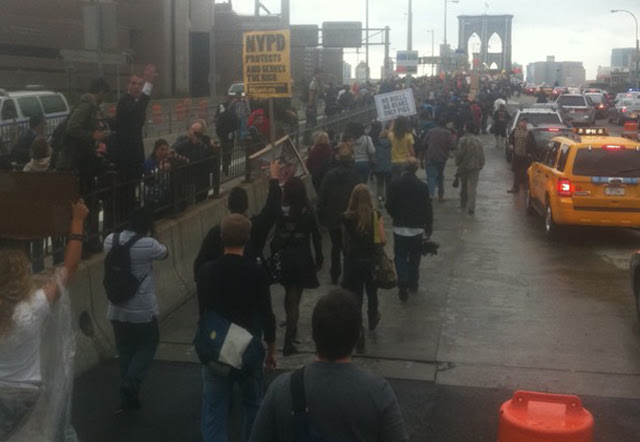 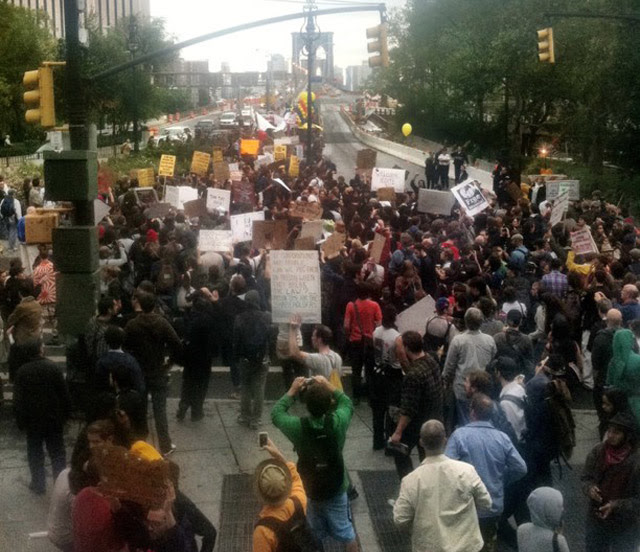 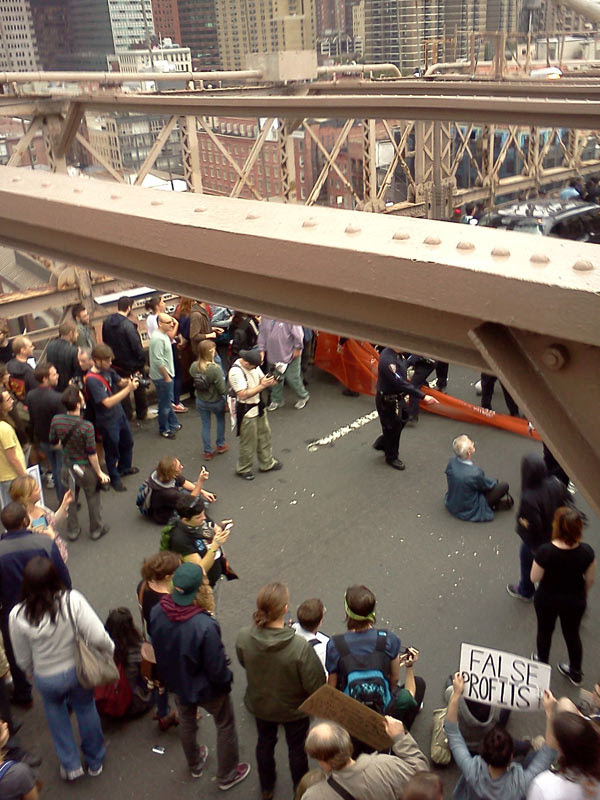 More photos and context after the jump
Shouted into the void by The Punk Patriot at 10:19 PM