The Inextricable Link Between Social and Environmental Justice

Erica Violet Lee of Idle No More in conversation with Dennis Trainor, Jr. of Acronym TV on the eve of the largest Climate Justice march in history.

“It is important to acknowledge the Indigenous people who have been fighting this battle on the front lines for centuries,” says Lee. “The big marches and massive actions (like the People’s Climate March) serve as motivation. I take it back to my community (because) ultimately I think it is acts of everyday resistance that will change they way things are done.”

Erica speaks about the violence that goes hand in hand with Canada pushing through Keystone XL Pipeline, “pushing first nations people off their lands to get to resources on the lands. There is a lot of violence – especially towards Indigenous Women who are going missing and getting murdered in record numbers.”

“What we are trying to bring attention to,” says Lee “is that social justice and environmental Justice are inextricable linked.” 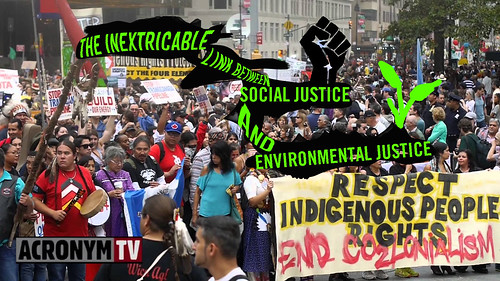 Shouted into the void by The Punk Patriot at 9:46 PM