The Time For Obama To Pardon Snowden Is Now

Now that President Obama is proposing that the NSA end its bulk collection of data, it is time that Obama take this narrative to the next logical conclusion and offer a full and unconditional pardon to Edward Snowden.

President Obama’s War on whistle blowers (he has charged eight individuals with Espionage, compared to only three under all previous presidents) needs to end.  His recent proposal, even though it was forced by the courts, and to a large degree Mark Zuckerberg and the other titans of the tech world who warned that the U.S. government spying programs would hurt business, is still an admission that Edward Snowden’s actions were justified.

As Michael Maiello, writing in Esquire puts it:

The moral courage of Edward Snowden’s act of whistleblowing and Glenn Greenwald’s unimpeachable reporting have revealed what Chris Hedges has labeled a government drunk with power:


“drunk with the power to sweep up all your email correspondence, your tweets, your Web searches, your phone records, your file transfers, your live chats, your financial data, your medical data, your criminal and civil court records and your movements, those who are awash in billions upon billions of taxpayer dollars, those who have banks of sophisticated computer systems, along with biosensors, scanners, face recognition technologies and miniature drones, those who have obliterated your anonymity, your privacy and, yes, your liberty.”

That the White House and Congressional leaders have recently unveiled similar proposals to end the NSA bulk collection of phone records has less to do with a come to Jesus sober up moment and more to do with the fact that they were given an ultimatum by a court (and a 6 month deadline) to defend the constitutionality of collecting the data related to every phone call made by every US citizen.

Our constitutional scholar of a president could, of course, make no such case to continuing the phone collection program, and now seeks, he says, to win back the public’s trust.

One step towards winning back the public’s trust would be by granting Edward Snowden a full pardon. In addition to being a tactical move to counter the growing understanding that Big Brother is watching, it has the added advantage of being the right thing to do. 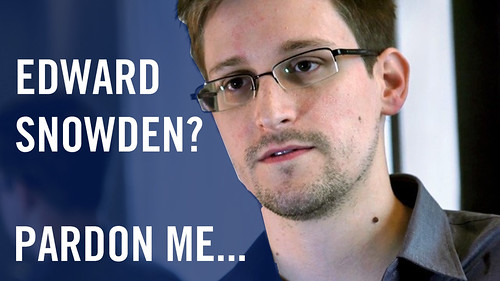