Does The U.S. Want War With Russia?

Two weeks ago, when Liz Wahl quit her post as an RT host live on air claiming that she could not be part of a network that was “funded by the Russian Government” and was set on “whitewashing the crimes of Putin.”

Ms. Wahl then immediately went on a tour of all the 3 mainstream corporate outlets where she seemed to be auditioning for a role on a news show where she could whitewash the blowback inducing homicidal bull in a cultural religious and geopolitical china shop of U.S. foreign policy that I like to call Manifest Destiny’s Child.

Even Chris Hayes jumped on the bandwagon, celebrating Wahl as “incredibly badass”, but before you join the Liz Wahl fan club, take a moment to read the excellent follow up report from Max Blumenthal and Rania Khalek, which outlines how Wahl’s attempt at a Networkesque type of movement was coordinated by the Neo-Conservative think tank foreign policy initiative. Blumenthal and Khalek report:


“Behind the coverage of Wahl’s dramatic protest, a cadre of neoconservatives was celebrating a public relations coup. Desperate to revive the Cold War, head off further cuts to the defense budget and restore the legitimacy they lost in the ruins of Iraq, the tightknit group of neoconservative writers and stewards had opened up a new PR front through Wahl’s resignation. And they succeeded with no shortage of help from an ossified media establishment struggling to maintain credibility in an increasingly anarchic online news environment. With isolated skeptics branded as useful idiots for Putin, the scene has been kept clean of neoconservative fingerprints, obscuring their interest in Wahl’s resignation and the broader push to deepen tensions with Russia.”

Despite the depth of the Blumenthal/Khalek piece that lays bare the machinations of, among other things, the very sadistic dangers and Apocalyptic flirtations of the military industrial complex married to a Straussian Noble Lie wherein the real life Dr. Strangelove’s who launched a Global War on Terror, CORRECTION, Global War on brown people in lands that have not declared war on us and pose no threat to us CORRECTION Global War on everything everywhere including US Citizens because in the USA journalism is the new terrorism, and our charming peace prize winning President maintains a kill list and claims more autonomy in using it than a mafia don … DESPITE all this most people here in the United States can be split into 2 camps when it comes to Russia.

In the majority camp you have people who think the U.S. support for Ukraine and saber rattling with Russia is just another chapter in the story book tale of the U.S. as a superpower spreading good, protecting freedom lovers the world over from tyrants and monsters like Putin, and in the minority camp you have people who think Ukraine is a 12 seed in the Eastern Bracket of their March madness office pool. An even smaller group, recognize that while Putin may not be a knight in shining armor, that this story is in fact a bit more nuanced than the plot of a fairy tale.

For those of us able to look at the world without tint of nationalistic goggles the mainstream corporate media Liz Wahl so desperately wants a job working for demands that we wear, one thing is crystal clear: The world still has two major nuclear powers, the United States and Russia. For decades, it has been the United States who has been the aggressor in this relationship. As Diana Johnstone, writing at Counterpunch puts it:


“Is Russia urging Quebec to secede from Canada so that the province can join a military alliance led by Moscow? Evidently not. That would be comparable, and yet mild compared to the recent U.S. gambit led by Victoria Nuland aimed at bringing Ukraine into the Western orbit. (…) Russia professes no hostile ideology, and only seeks normal relations with the West. What more can it do? It is up to Americans to come to their senses.”

Asking Americans to come to their senses is easier said than done.

For a country whose birth was founded on an occupation and then a genocide, whose wealth was built on the backs of slaves, and whose expansion was justified through a perverse notion of manifest destiny, denial has become a dominant part of our collective identity.

Does the U.S. want war with Russia?

Judging by our actions the next front of our perpetual war never seems like an if, but a when. 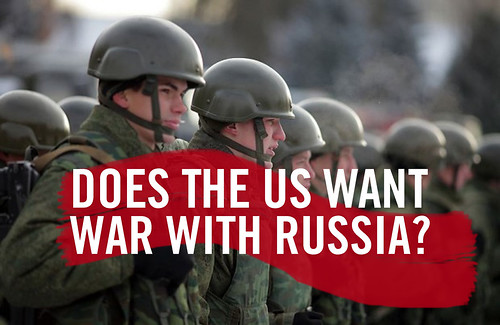 Shouted into the void by The Punk Patriot at 7:23 PM