The Hunger Games Are Real: We Are The Districts

Donald Sutherland, who stars in the Hunger Games Franchise, wants to see a revolution that brings about the end of the American Empire, and he wants the Hunger Games movies to be a spark for that flame. Speaking to Rory Carroll of the Guardian UK, Sutherland says: "You know the young people of this society have not moved in the last 30 years." With the exception of Occupy, a minority movement, passivity reigns.” Whether Sutherland is engaging in a very clever marketing ploy or he sincerely wants to see a revolution is a question for another day.

Carl Gibson, in this exclusive for the Resistance Report, shows us just how close we are to the dystopian futuristic landscape of the Hunger games:

“Just as was described in The Hunger Games, the resistance here has been met with the cold boot heels of police, who only exist to protect and serve the 1 percent and their property. The chilling footage of the UC Davis Police pepper-spraying "Occupy UC Davis" student protesters sitting peacefully, UC Berkeley police clubbing Occupy protesters with batons, the NYPD violently assaulting and mass arresting protesters and credentialed journalists, and the Oakland police turning the streets into a war zone are clear evidence that the state does not tolerate dissent. Scott Olsen is living proof that even those who go overseas to fight the nation's wars are not immune from the state's violence against dissenters when they come home and participate in nonviolent protest.” 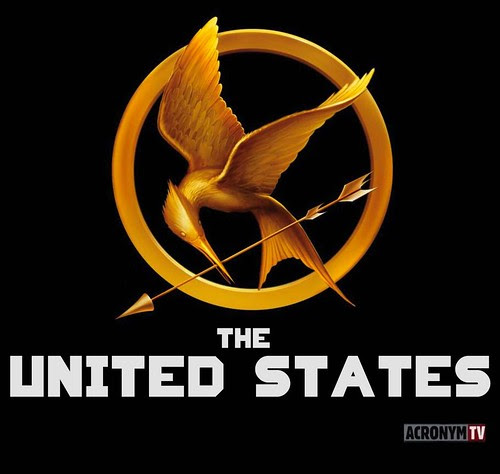 Shouted into the void by The Punk Patriot at 7:03 PM