“I am fundamentally an optimist. Whether that comes from nature or nurture, I cannot say. Part of being optimistic is keeping one’s head pointed toward the sun, one’s feet moving forward. There were many dark moments when my faith in humanity was sorely tested, but I would not and could not give myself up to despair. That way lays defeat and death.”  – Mandela wrote in his memoir Long Walk to Freedom

Reflecting on the death of Nelson Mandela, Jerome Roos, writing at Roar magazine states: “The only appropriate way to honor the legacy of the iconic freedom fighter is not to beatify the man but to take his struggle to its logical conclusion.”

The finality of death, combined with the human need for a neat linear narrative, will work against placing Mandela’s impact on a continuum. For, while it may be true that the arc of the moral universe is long, but bends towards justice – that bending is still not happening for too many in South Africa, and the world over.

Watching the farcical juxtaposition of our a noble peace prize winning President who, through his drone program, commits acts of global terrorism memorializing Nelson Mandela, another noble peace prize winner, who even after earning that honor and serving as the president of South Africa, remained US terror watch list until 2008 makes one wish that clearer voices for justice emerge to shape the narrative and bend that moral arc. 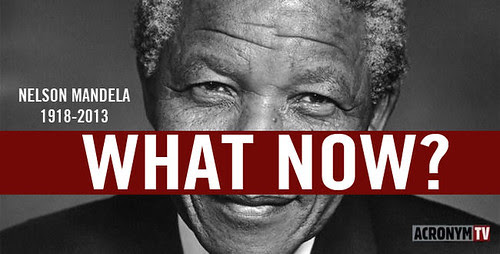