Does A Globally Renowned Activist Have Ties To Global Intel Firm STRATFOR?

An interview with Carl Gibson, the co-founder of US UNCUT and co-author of the recently published story on Occupy.com that claims that a globally renowned activist whose claim to fame includes being one of the architects of the movement that overthrew Slobodan Milosevic has been collaborating with the intelligence firm Stratfor. Horn and Gibson write:

“Lesser known, an exclusive Occupy.com investigation reveals that Popovic and the Otpor! offshoot CANVAS (Centre for Applied Nonviolent Action and Strategies) have also maintained close ties with a Goldman Sachs executive and the private intelligence firm Stratfor (Strategic Forecasting, Inc.), as well as the U.S. government. Popovic’s wife also worked at Stratfor for a year.

These revelations come in the aftermath of thousands of new emails released by Wikileaks' “Global Intelligence Files.” The emails reveal Popovic worked closely with Stratfor, an Austin, Texas-based private firm that gathers intelligence on geopolitical events and activists for clients ranging from the American Petroleum Institute and Archer Daniels Midland to Dow Chemical, Duke Energy, Northrop Grumman, Intel and Coca-Cola.

Referred to in emails under the moniker “SR501,” Popovic was first approached by Stratfor in 2007 to give a lecture in the firm's office about events transpiring in Eastern Europe, according to a Stratfor source who asked to remain confidential for this story.

In one of the emails, Popovic forwarded information about activists harmed or killed by the U.S.-armed Bahraini government, obtained from the Bahrain Center for Human Rights during the regime’s crackdown on pro-democracy activists in fall 2011. Popovic also penned a blueprint for Stratfor on how to unseat the now-deceased Venezuelan president Hugo Chavez in September 2010.”

Gibson and co-author Steve Horn’s conclusions are not without their critics. Andy Bichlbaum of the Yes Men authored a scathing rebuttal claiming that Gibson and Horn are engaged in Yellow Journalism:

“Carl Gibson and Steve Horn’s misleading and poorly researched story—about the links between Srdja Popovic, cofounder of Otpor! and CANVAS, and a crappy corporate spy outfit named Stratfor—does no one any good.” 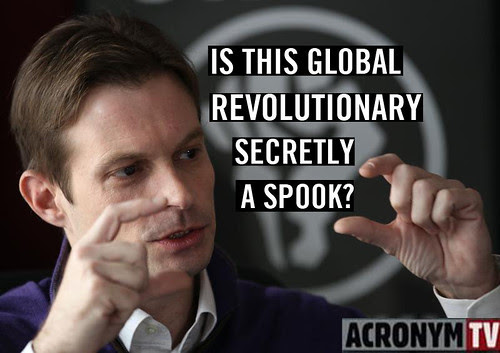 Shouted into the void by The Punk Patriot at 12:09 PM