Why I Won't Donate to Greenpeace 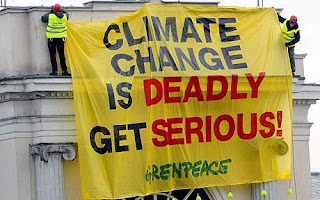 While walking down Congress Street a few days ago, I was solicited by a Greenpeace volunteer. They were in Portland signing up new members and seeking donations. I chatted with the young woman for a few minutes, but declined to make a donation as, quite frankly, I have been rather short of funds lately.


But, truth be told, I likely would not have contributed anything even if I had the money to do so. The thing is... I kind of hate Greenpeace—and the Sierra Club, and the National Resource Defense Council (NRDC), and Environment Maine along with most of the other prominent environmental groups.


Obviously, I wholeheartedly support these groups’ mission of environmental protection. But, like so many “progressive” nonprofits (MoveOn, The Center for American Progress, 350.org, Equality Maine, to name a few), most of the major environmental organizations have become little more than front-groups for the Democratic Party.
Additionally, some of the primary funders of these organizations call their commitment to green energy solutions into question. The “Big Enviros,” like corporate grant-dependent, NPR (“This edition of Living on Earth is brought to you by a generous grant from the Chevron Corporation!”), have essentially allowed themselves to be co-opted by Big Business and the fossil fuel industries.


(Before going further, a bit of clarification is in order. Greenpeace and the Green Party are two entirely separate and highly disparate organizations. I point this out because people constantly confuse the two.)


For starters, all of the major environmental orgs endorsed Barack Obama for re-election last fall. In fact, many of them did so as early as April 2012.


Contrary to N.Y. Mayor Michael Bloomberg’s claims, Obama is hardly the environmental champion the media often make him out to be. Indeed, Obama’s environmental record has been abysmal. He has taken no action on climate change. The only feasible climate change legislation Congress seems capable of passing is a dreaded, watered-down cap-and-trade bill which essentially lets the “free-market” decide how much CO2 corporations are permitted to pump into the atmosphere.


Obama continues to tout an “all of the above” energy approach which, as of this year’s State of the Union Address, still includes something called “clean coal.” Such a thing does not exist. And while environmentalists may have won a temporary victory in managing to stall the authorization of the Keystone XL Pipeline, Counterpunch’s Jeffrey St. Clair says the pipeline’s construction is “already a fait accompli” (“The Silent Death of the American Left,” 5/24-26/2013).


And need I remind readers that shortly after the Fukushima Daiichi reactor meltdown in Japan, the president called for more nuclear power plants here in the U.S.?


I think simple partisanship is what this is really about. Back in January, Green Party presidential nominee Jill Stein was prohibited from speaking during a massive--allegedly “non-partisan”-- anti-tar sands rally in Portland. Rep. Chellie Pingree and Mayor Michael Brennan—both Democrats—spoke at length, however. (Pingree, incidentally, flew in on a helicopter, gave her scripted speech, then was promptly spirited away. Stein, on the other hand, actually took part in the march and received no such VIP treatment. Kinda demonstrates which party is really serious about climate change and which is just looking to score political points.)


Simply put, it is completely hypocritical for the Big Enviros to claim they care about global warming, fracking, tar sands, renewable energy and the like, and then vote for a corporate, Wall Street-funded Democrat who spent his first year in office pushing for an obscenely destructive pipeline to transport some of the dirtiest, most corrosive unrefined oil on the planet across half the country.


Then there is the curious issue of who is funding these environmental groups.


Turns out the Sierra Club has, up until recently, received an estimated $25 million from the natural gas industry. The news broke last year that from 2007-2010 Sierra Club executive director, Michael Brune, clandestinely accepted the money from Chesapeake Energy, a major supporter of hydraulic fracturing or “fracking.”


The revelation led to a number of progressives publicly withdrawing their support of the organization, most notably author and environmental activist, Sandra Steingraber. In an open letter published in Orion Magazine (“Breaking Up with the Sierra Club,” 03/26/2012), Steingraber informed the Sierra Club, “I’m through with you.” She announced she was relinquishing her title of “the new Rachel Carson,” bestowed on her by Sierra, and erased the Club’s jacket-endorsement that had adorned her 1997 book, Living Downstream.


Steingraber defended her disassociation with the group as such:


The Sierra Club had taken money, gobs of it, from an industry that we in the grassroots have been in the fight of our lives to oppose. The largest, most venerable environmental organization in the United States secretly aligned with the very company that seeks to occupy our land, turn it inside out, blow it apart, fill it with poison. All for the goal of extracting a powerful heat-trapping gas, methane, that plays a significant role in climate change.


She added, “It was as if, on the eve of D-Day, the anti-Fascist partisans had discovered that Churchill was actually in cahoots with the Axis forces.”


Harsh words, to be certain.


Again, I support the Enviros’ overall goals of environmental advocacy. Unfortunately, the myopic, partisan viewpoints of their managing boards as well as their members have rendered them virtually impotent. Why bother getting arrested with Bill McKibben and friends outside the White House lawn, when you are ultimately going to support its occupant come Election Day—regardless of any action he does or does not take? At what point do these “designer protests” as St. Clair calls them, become little more than empty publicity stunts?


When it comes to global warming, we can no longer afford to waste time on such symbolic measures. The environmental movement needs to get real serious, real fast. Anyone who doubts me need only scan the front-page headline of a recent issue of The Nation: “It’s Not Warming,” it says underneath a picture of earth, “It’s Dying.”


Last November, Jill Stein and Rocky Anderson were the only candidates running on any serious environmental platform. Any self-described environmentalist who could not bring himself to vote for either of them may as well just pack it up and prepare for the environmental Apocalypse.


So, please stop asking me for money, Greenpeace and Friends. What little I have will go exclusively to the Green Party where it can actually do some good.
Shouted into the void by Unknown at 1:39 PM