Bradley Manning: Where is the Outrage? 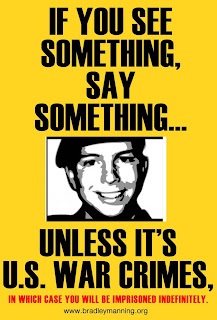 Pfc. Bradley Manning's trial began in Fort Meade, MD last week. But, outside of Democracy Now! and the progressive blogosphere, citizens are unlikely to hear or read anything about it. The little coverage the corporate media has granted Manning's trial has been far too brief to offer audiences any substantive understanding of his "crime."

"U.S. Army Private Bradley Manning went on trial today in a military court for leaking hundreds of thousands of classified documents to the website WikiLeaks. Manning has admitted that he did it and pleaded guilty to some charges, but the military is trying him on more serious charges, which include aiding the enemy. He could face life in prison."

That three sentence summary was the entire report. As FAIR's (Fairness and Accuracy In Reporting) Peter Hart pointed out, the report was "shorter than Pelley's interview with former Bush Secretary of State Condoleezza Rice, and about the same length as a report on a solar-powered plane" ("Bradley Manning on TV Network News," FAIR Blog, 06/04/2013). Other networks have presented similarly skimpy coverage--if they offer any at all.

And yet the response from liberals over Manning's plight has been a collective shrug. The 25-year-old Manning, who valiantly stood up to the U.S. Imperial Project, could spend the rest of his life in prison for his act of defiance and progressives do not seem to really care. How can this be...?

First, let's review what we know.

Manning has been held for three years now without trial in conditions that many legal experts have called torture. The military-trial that began last week appears, by all accounts, to resemble a closed-door, Kangaroo Court-style tribunal rather than any sort of a fair, unbiased hearing where Manning is presumed innocent until proven guilty. The prosecution is arguing Manning's leaking of thousands of troves of classified military cables (the largest leak in U.S. history) directly aided "the enemy," or al-Qaeda.

There is, to be clear, not one shred of evidence Manning's leak harmed or endangered anybody. As Norman Solomon points out in a recent Op-Ed ("Bradley Manning is Guilty of 'Aiding the Enemy'--if the Enemy is Democracy," Common Dreams, 6/05/2013):


"...the Pentagon has admitted that none [no soldiers] died as a result of Manning's leaks in 2010. But many of his fellow soldiers lost their limbs or their lives in U.S. warfare made possible by the kind of lies that the U.S. government is now prosecuting Bradley Manning for exposing."

Yet where is the groundswell of support to free Manning? Among liberals it is virtually absent. In fact, many progressives have been downright hostile toward Manning, as well as Julian Assange.

Alyssa Rosenberg of the liberal Center for American Progress, in a particularly juvenile blog post that comprises all of two paragraphs, dismisses Manning as someone with "pretty serious emotional problems," who "turned out not to be a particularly effective whistleblower" ("Bradley Manning and the Drama of Instant Messaging," 01/02/2012). She then adds there "will almost certainly be a live-action movie about WikiLeaks and Manning's relationship with the organization..."

Seriously, how old is Rosenberg? Fifteen? The aforementioned CBS News report had more substance than this drivel--and it was shorter.

It is no accident that Rosenberg makes no reference to the content of the military cables, not to mention the monstrous atrocities they depict U.S. military personnel engaging in. This is part of the pattern to discredit Manning: Shoot the messenger; ignore the message. Or as Chris Hedges explains in a recent piece for Truthdig, when it comes to Assange and Bradley Manning, "The personal sin is excoriated" ("'We Steal Secrets': State Agitprop," 06/02/2013).

The vast structural sin Assange and Manning fought is ignored. The primacy of personal piety over justice is the inversion of morality. It is the sickness of our age. David Petraeus is hounded out of the CIA not because he oversaw death squads that killed thousands of innocents in Iraq or because the CIA tortures detainees, but because he had an extramarital affair. The power elite can draw up kill lists, torture people, wage endless war and carry out massive fiscal fraud on Wall Street as long as they don't get caught sleeping with their administrative assistants. Assange can lay bare the crimes they commit, but his act of truth-telling is canceled out by alleged sexual misconduct.

This is the case in nearly every news article one reads about Manning. Reporters inevitably focus on Manning's alleged sexual frustration. (Manning is gay, a fact that has been widely used by his detractors to discredit him.) It is the equivalent of making a statement--as my conservative aunt frequently does--like, "I don't like Michael Moore because he is fat." Moore is indeed overweight, but what this physical characteristic has to do with the content of his films is difficult to ascertain. But it makes for a convenient method of easily dismissing an individual whom one disagrees with ideologically without actually engaging in any sort of philosophical counterargument.

The LGBT community has, likewise, abandoned Bradley Manning. One would think Manning's plight would offer the LGBT community an ideal cause to rally behind. Instead, the various gay-rights advocacy organizations remain exclusively, almost at times obsessively, focused on same-sex marriage. (Gay marriage is no doubt a worthy civil rights imperative and one that I, for the record, wholeheartedly support. I have in recent years however, become increasingly concerned marriage--an inherently conservative institution, mind you--has become the be-all-end-all raison d'etre for the entire gay-rights movement.)

Gay rights advocate, Andy Thayer, agrees. In an essay for Counterpunch.org ("Bradley Manning and the Appalling Silence of Gay, Inc.," Feb. 22-24, 2013), Thayer blames the various LGBT NGOs' ties to the Democratic Party for their inaction on Manning. "It's political cowardice," Thayer writes of "Gay Inc's" passive acceptance of Manning's plight. "A failure to take on 'difficult' political subjects, particularly when doing so might bite the (Democratic Party) hands that feed them."

At the end of the day, Gay Inc. sees its source of jobs in Democratic administrations, its executive directorships with six-figure salaries, its charity balls and other celebrity-driven hoopla as more important than gay rights. And when individual LGBTs like Bradley Manning through their own courage expose the human rights fakery of Democratic politicians, they can twist in the wind.

I contacted Equality Maine's Portland office for comment on this article, but the group did not get back to me. Their silence, and the silence of the rest of the LGBT progressive community, speaks volumes.

Yet, I think what really accounts for this betrayal is, at the end of the day, Manning and WikiLeaks are both too radical for contemporary, mainstream liberals. Manning did not merely expose war crimes--he exposed President Obama's war crimes. And the "anti-war" liberal community--which so desperately wants to believe, against all evidence to the contrary, that Obama is some sort of champion of peace--is unwilling to challenge those war crimes. Indeed, given that close to 80 percent of liberals support the use of predator drones and 53-67 percent of democrats prefer to keep Guantanamo Bay Prison open, it seems many liberals support the president's policies.

As Salon writer, Charles Davis pointed out in a piece from last year ("The Liberal Betrayal of Bradley Manning," 04/10/2012), what Manning did was "fundamentally radical, not reformist."

He didn't settle for working within a system specifically designed to thwart the exposure of wrongdoing, through a chain of command that callously ignores concern for non-American life. Having access to evidence of grotesque crimes no one around him seemed to care about, he engaged in direct action, exposing them for the benefit of the world and those paying for them, the U.S. taxpayer.

As a result, Manning and Assange are left abandoned as sacrificial lambs, while the real criminals--the Wall Street speculators, the weapons manufacturers, the perverted military industrial complex, and the warmongering politicians--walk around free and unassailable.
Shouted into the void by Unknown at 5:30 PM