A while back, there was a meme floating around facebook saying that our Solar System was part of a larger system of stars mimicking the order of our solar system of planets, a system called the "Pleadian Star System."

I couldn't find anything about it. So I asked Dr Steven J. Gibson, an astronomer at the Aricebo Observatory, who did his dissertation on the Pleiadies Reflection Nebula.

So there's been a meme floating around Facebook lately about how our solar system is part of a bigger solar system called the pleiades system.

I am not an astronomer, and while the idea of our star being part of a star system that mimics our solar system is appealing to the human desire for order in the universe, I have doubts as to whether or not this is the case.

My instinct is to say that it's total bunk, especially given the number of web results having to do with "Nordic Aliens," "UFOs," and "cosmic alignments coinciding with major historic events" that google turns up when I search for the term "Pleiades Star System."

So since I could not find anything conclusively on my own, I was wondering if you knew the answer. 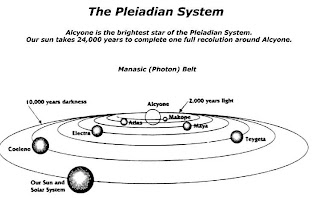 I'm sorry this response is so late. I moved years ago and don't read this
email address much anymore; please respond to the cc'd address above.

The meme you reference dates back to a bit of 19th-century pseudoscience,
which held that Alcyone, the brightest star in the Pleiades, was somehow
the center around which everything orbited, including our Sun and all the
visible stars of the sky. It was never taken seriously by scientists, but
it has retained an irresistable allure for some people ever since, as you
have discovered online. In reality, we have known for most of a century
that our Solar sytem is part of a galaxy of billions of stars orbiting a
common center some 30,000 light years away in the direction of the
constellation of Sagittarius; you can read more about this here:

Nice blog, by the way. The drone drinking game is brilliant, but
depressing.

Shouted into the void by The Punk Patriot at 8:10 PM