Musings on Why it's Not Easy Being Green 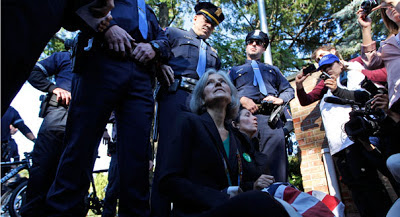 The Maine Green Independent Party held its annual state convention Sunday, in Belfast. Jill Stein, 2012 presidential candidate, delivered the keynote address. While many of the looming threats Stein outlined in her speech are dire (economic collapse, exploding student debt, a permanent low-wage economy, environmental crisis), she also offered attendees reason to take hope. Indeed, after nearly 30 years of struggling to defend our political legitimacy, it seems voters are finally listening to what the Greens have to say.


“We are not powerless,” Stein told the crowd. “We are so powerful the corporate media is afraid to talk about us.”


Media coverage of the Green Party tends to follow the pattern outlined in Gandhi’s famous saying, “First they ignore you, then they laugh at you, then they fight you, then you win.” The corporate media tried to ignore us for years. Now they seem to have moved on to the “laugh”phase.


This was largely the case with Stein’s campaign last year. ABC News political blogger, Matt Negrin dismissed not just the Greens but third-parties in general, claiming their ideas “tend to be a bit radical”(06/06/12). Those “radical” ideas include cutting the bloated, wasteful military-spending budget, legalizing marijuana (a concept now supported by a majority of Americans) and creating decent, well-paying jobs. He’s right--such common sense policies are way too radical for Disney-owned, ABC. In a follow-up article some weeks later (07/11/12), Negrin condescendingly calls third-party candidates a “fun footnote in U.S. presidential elections.”


In a rigged, one-party system where it is virtually impossible to vote against a Wall Street sponsored, corporatist candidate, the Green Party is the only genuine grassroots party that speaks for the citizens.“The politics of fear has given us everything we were afraid of,” Stein said. She is right: The corporate media are afraid of us. That is why they go out of their way to mock, ridicule and belittle us. The last thing they want is for informed, morally conscious voters to take us seriously.


And this sort of negative coverage is not limited to the national media. Bollard editor and Bangor Daily News blogger, Chris Busby has been waging a personal vendetta against recently elected Portland School Board member and Green, Holly Seeliger for several months now.


Two weeks ago, he devoted an entire column to discrediting her (“Taking ‘sexist’ back,” 04/25/13). In it Busby writes, without a hint of irony, of his detractors, “…the people who resort to personal attacks and name-calling are morons.” Yup. You’ve got that right, Chris.
To date, I have not read one substantive criticism Busby has of Seeliger’s politics, school reform proposals, or votes. His comments are almost exclusively about Seeliger’s hobby of burlesque dancing. If Busby has a legitimate gripe with an elected official, that is one thing. But he doesn’t. In fact, the man has nothing of substance to say about anyone or anything. If Holly were not a Green I highly doubt he would devote nearly as much ink to her.


Democratic apparatchiks like Maine Rep. John Hink persist in baselessly blaming Ralph Nader for throwing the 2000 presidential election to George W. Bush. This argument ignores the fact that Al Gore won the election. It was the Supreme Court—engaging in the same sort of “judicial activism” its conservative members constantly decry by those on the left—that voted to end the Florida recount, thus handing the presidency to Bush. More importantly, this entire argument hinges on the presupposition that, had Nader not been an option on the ballot, Green voters would have automatically selected Gore as their default candidate. Some of them likely would have done so, yes. But most Greens I know do not compromise so easily. Had Nader not been running, it is more conceivable those voters would have simply stayed home.


Yet 13 years later this bogus notion that Nader“stole votes” from Gore refuses to die. (Point of clarification for liberals: Greens do not “steal” votes. They earn them.) Democrats hysterically trot it out every election cycle to scare progressives into voting against their own interests. Democrats’marginalization of Nader comes directly out of the Republican playbook: Shoot the messenger, ignore the message. It is the same tactic they have used more recently to smear Julian Assange (“Rapist!”) and Bradley Manning (“Angry gay!”). Nader’s public transformation from honored consumer advocate, to egomaniacal “spoiler” was no accident. The corporate-controlled Democratic Party orchestrated it.


As John Stauber writes in a recent article for Counterpunch (“The Progressive Movement is a PR Front for Rich Democrats,”March 15-17, 2013):


“After the 2000 presidential election…rich liberal Democratic elite began discussing, conspiring and networking together to try and make sure that no scruffy, radical political insurgency like the Nader 2000 campaign would again raise its political head. They generally loved Al Gore, the millionaire technocrat, and they put in play actions which led to the creation of a movement of their own that aped the right-wing’s institutions.”


Being Green makes you something of a pariah not only in politics, but even in everyday social interactions. A recent encounter with BDN blogger, Carol McCracken at the grocery store, serves as a perfect example. “You’re a Green, huh?” McCracken sneered upon seeing my Maine Greens pin on my jacket. She then proudly informed me, “I never vote Green.”


I responded as I always do in these sorts of exchanges. I asked her, “Which of our Ten Key Values do you disagree with?”McCracken did not respond to my question, which indicates to me she is not familiar with any of the Key Values. (In other words, she has completely dismissed a political party she knows next to nothing about. Good to know she is such an informed voter.)
Instead she repeated robotically, “I never vote Green!” After Mrs. McCracken lectured me on how marijuana is the “gateway drug,” Congress Square Park should “absolutely” be sold to private realtors, and would-be City Councilor Wells Lyons (I hear he’s running again this year) is a “covert Green,” I managed to cordially end the conversation and escape to the check-out line.


This is the sort of treatment Greens receive on a regular basis. Even the seemingly innocuous act of grocery shopping turns into a political debate over our very right to exist. Of all my quirky, left-leaning pins and t-shirts, none provoke as much rage from liberals as the one that says simply, “Maine Greens,” with a hand-drawn dandelion flower.


Shouted into the void by Unknown at 4:33 PM