What if capitalism wasn't evil? --The Entrepreneur Challenge!

What if Capitalism wasn't so evil? Let's play a little game and find out.

Today I'm launching my Entrepreneur Challange. I'm going to be attempting to prove that capitalism can be good for all parties involved. And dare I say it-- even fun?

What sparked all this? Well a long while ago, a certain progressive radio show asked its audience (half jokingly) to create a certain tshirt design, which they described rather abstractly. I said to myself, "self- you make t-shirts! You should be all over this!"

And I took that abstract jibber-jabber and turned it into reality. And because in my mind, I was thinking that I would help promote their radio show, I included a link to the web address for the show. Through certain means, I was able to make sure that the hosts of the show saw a photo of this shirt that I had created. --Which was displayed publicly, online. The hosts lauded my work. Soon, other fans of the show started commenting that they wanted to purchase a copy of this shirt. So I created a listing on Etsy.com to make that shirt available to sell.

Shortly after I'd created that listing, these supposedly progressive, supposedly anti-capitalist, supposedly DIY-punk, supposed activists, came down on me with fury; accusing me in a series of emails of violating their intellectual property rights. And they asked me to immediately take down my listing. At the time, I was still a huge fan, and I tried to salvage the situation, and so I complied.

Later, they communicated to me that they would be interested in splitting any profits that I made, selling a shirt that I designed, that I meticulously hand-cut stencils for [I didn't have silkscreening equipment yet], that I hand printed, that I purchased the materials for, and that I would end up paying the shipping for.

They wanted a cut of the money that I would earn from MY labor-- labor I spent trying to help THEIR fans to promote THEIR show to their friends-- in true DIY style.

I thought that their proposal was complete and utter bulls***, and I told them as much. Ironically, these supposedly progressive, DIY, pro-union folks now run their merchandise through zazzle or cafe press or something.

Ever since that event, I've been inspired to create an entrepreneur challenge, to you, my viewers.
But it's sat on the back burner until recently, when out of the blue, some jerk threatened me with a lawsuit for "ripping off" some drawing that I'd never seen before in my life.

What these two incidents have in common is people acting like a**holes over intellectual property rights.

Back in early 2003, I went to an anti-war protest in Washington DC. I took with me a banner that read, "Who Would Jesus Bomb?" 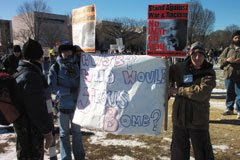 It was a turn of phrase that I myself had coined, having recently moved from Texas [where WWJD bracelets and t-shirts were all the rage]. Me and my friends marched around the mall with this banner, and people loved it. A few months later, I saw WWJB bumper stickers and t-shirts for sale through various progressive outlets on the internet.

Now, I could have been a dick about it, complaining that they were making money with something that I came up with. I, however, see it as a victory. I was able to create something that affected the nations consciousness. And isn't that the point? Shouldn't that ultimately be our goal?

I don't do this show, [or this blog] to make money. I do this to make just enough money that I can afford to keep on doing this. By the way, the donations are extremely appreciated. Thank you. And a preemptive thank you to those who will be donating today. (hint hint)

Well, I'm going to start this challege off by making the Punk Patriot an open source brand. There are a few rules however:

Rule #1: It's got to promote the show. So link back somehow.
Rule #2: You are allowed to keep whatever money to make selling this item.
Rule #3: Don't rip people off. That's lame.
Rule #4: It's gotta be designed by you. I have a strong preference that it also be hand crafted by you.
Rule #5: No zazzle, and no cafe press.

Well now you have my permission. Nay! Encouragement!

To life, liberty, and pursuit of a less f***ed up government.

Shouted into the void by The Punk Patriot at 6:05 PM