About 2 minutes into this otherwise standard newscast about Obama's visit to the Gulf Coast is a startling accusation-- that BP hired a phony cleanup crew for show during Obama's visit.

If you don't think that a company would do something like this, you should know that they have been doing it for decades.

Read the book "Toxic Sludge is Good For You!: lies, damn lies, and the public relations industry" 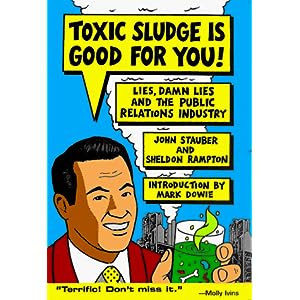 +++++++++++++++
So there are now several sources confirming that BP did indeed just bus in actors to pretend to be a cleanup crew during Obama's visit.

"It appears to have been a PR stunt by BP, not to say we don't appreciate the extra participation," Young said. "We certainly need them, but we don't need them for just one day that happens to coincide with a visit from the president."

Young said he saw the workers dressed in red shirts, blue jeans and black shrimp boots mulling across the beaches and in the mess hall during the president's appearance. They were uniformed in a way "which you don't normally see workers dressed like that," Young said.

After Obama's departure, Young said, the work crews all but vanished.

"This is a total shame that a mockery has been made of this visit by the executives of BP," Councilman Chris Roberts said.

"What we want to make clear (is) if they're going to send them, then send them everyday, not just on the day of the president's visit," Councilman Tom Capella said.

And Councilman Young throws out one of the worst insults a Louisianan can:

Young stopped short of saying Jefferson Parish officials were frustrated with BP's response to a disaster that has affected more than 100 miles of coastline. But he noted that parish officials commandeered idle BP-hired vessels last week to begin skimming oil that had traveled into Barataria Bay.

He said there appears to be a disconnect between the oil company and the Coast Guard, which is in charge of the response effort.

"I would compare BP today to FEMA after Katrina," Young said, recalling the halting response of the federal emergency agency in the days following the 2005 hurricane.

And from this transcript of a BP press conference from GottaLaff of Political Carnival:

CNN: We’ve never had 400 there, they spent time recruiting people for today, then Obama leaves, the workers leave too. Ironic that they’d pull off this type of shenanigans… It’s a slap in face, insulting to Gulf Coast residents and to the president. If they left every day at 2-3 o’clock that would be one thing, but this was no coincidence.

Shouted into the void by The Punk Patriot at 9:10 PM