WASHINGTON DC-- Press secretary Robert Gibbs announced today that the pre-emptive strike on the moon was successful in completely destroying the terrorist splinter cell known as "Al Quida in Space" and says that the administration is calling the entire mission a complete success.

"The White House wants to thank NASA's JPL, and the NASA press team for being so cooperative in working with the Department of Homeland Security and White House on this issue," Secretary Gibbs said. "No longer will Al Quida in Space be a threat to United States Security."

Gibbs went on to say that NASA has reported that all members of Al Quida in Space have been killed, including their much sought after ring leader, Osama Bin Laden.

When questioned about the deception leading up to the moon bombing, Gibbs declined to comment, other than to say that it was important that the terrorists not be allowed to know vital information about US strategies.

Meanwhile, anti-War protesters gathered outside accusing the government of bombing the moon for its natural resources.

"They're just bombing the moon for its water," said Andrea Goldsworthy of Code Pink. "They kept changing their story, first it was for science, then it was to eliminate terrorists, but it's clear what the motives have been all along. Water is a scarce resource, our sons and daughters and the people of the Moon don't deserve to be killed for the profits of Big Water," citing the campaign contributions by Nestle and other bottled water companies to Obama's election campaign.

President Obama is expected to make comments himself on the success of the mission later today. It's not known at present if there are plans to begin bringing troops stationed on the Moon back to Earth. 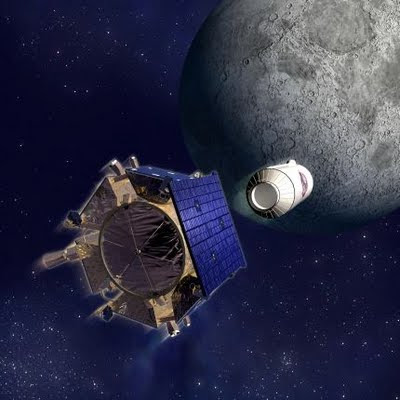 Artists rendering of the previously classified remote drone used to kill members of Al Quida in Space
Shouted into the void by The Punk Patriot at 5:02 PM