Saving The Internet: How the Impossible Shifted to the Inevitable

When President Barack Obama appointed venture capitalist and former Verizon and ATT lobbyist Tom Wheeler as chair of the Federal Communications Commission (FCC), it sent shudders down the spines of anyone concerned with the concept of net neutrality.

Last spring, it may have seemed an impossible task for activists and the Internet itself to defend net neutrality, but to date, they have.

As Margaret Flowers and Kevin Zeese of Popular Resistance point out:

“(Last) week (was) a turning point in a seven-month campaign to Save the Internet. The campaign began when FCC Chair, Tom Wheeler, told the media in May that he was considering creating a tiered Internet where wealthy corporations could pay for faster service giving them an advantage over start-ups, small businesses, entrepreneurs and citizen activists.”

Flowers and Zeese were among a small group of activist who, embodying the idea that small group of committed people can change the world, staged a blockade of Tom Wheeler’s driveway just hours before President Obama made his announcement in support of the concept of Net Neutrality.

The group Fight For the Future (FFTF) has been at the forefront of a broad coalition that has rallied to generate comments from 4 million people, 40,000 websites, and the President of the United States in support of net neutrality.

Earlier this year, FCC Chair Tom Wheeler announced that he wanted a decision to come down on the concept of net neutrality (the concept that everyone’s data should move at the same speed and that huge corporations or governments should not get to buy into a fast lane and/or interfere with what you do online) by the end of 2014.

Now that that decision is being pushed to early 2015, Evan Greer – a campaign organizer for FFTF, is calling out Wheeler for not listening to the overwhelming consensus of people, telling Acronym TV in the video above: “Now that there is a growing public consensus for title II reclassification, which is the only way to protect the internet, all of the sudden he wants to delay. From our perspective, it is pretty easy to see what is going on here which is that Tom Wheeler is helping out his buddies at Comcast and Verizon by delaying the process even though there is a complete public consensus now; between tech companies and now, finally, the President of the United States coming out to support reclassification.”

Responding to the hedge in the President’s statement of support, where Obama said, “the FCC is an independent agency and ultimately this decision is theirs alone,” Greer insisted that Obama could do more.

“The Obama administration would very much like to distance themselves from the situation,” Greer told me. “The reality is Barack Obama appointed FCC Chair Wheeler and he knew he was appointing a cable company lobbyist.”

“(Obama) has the power to demote Tom Wheeler and promote one of the other FCC commissioners to become the chair. Both of the other Democratic commissioners have mad more positive statements about title II than Wheeler has and certainly neither one of them were cable company lobbyists before coming to the (FCC). If Barack Obama really wanted to do something here, that is a tool that he holds. He could fire Wheeler and put someone in place that would actually protect the Internet and the public interest.” 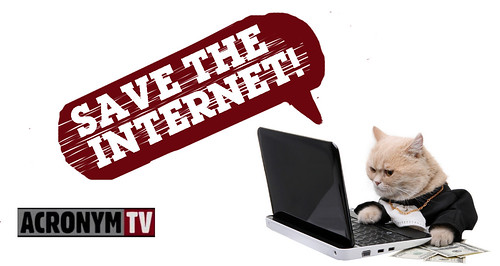 Shouted into the void by The Punk Patriot at 2:31 PM