As you know, a pre-emptive State of Emergency has been called in Ferguson, Missouri as the country waits to hear if officer Darren Wilson will be charged with the murder of Michael Brown.

Let’s focus on another State of Emergency for a moment.

Like me, you are the beneficiary of unearned white privilege. I’m not going to insult your intelligence, nor should you insult other members of this club we were born into, by cataloguing the laundry list of data that point to the clear fact that, taken as a whole, people who are or who present as white, experience privileges that are regularly denied to people who do not present as white.

It is a fact. Deal with it.

It is from that place of privilege that you and I will watch events unfold when the grand jury comes back with, as all indications seem to point, something less than a murder charge for another member of the white privilege club, Officer Darren Wilson.

Perhaps you will protest, standing side by side with the predominantly African- American crowd who will be expressing their justifiable rage in the streets.

Perhaps you will donate money to pay for a billboard in Ferguson that reads Pants Up Don’t Loot.

Perhaps you live in the greater Ferguson area, and will hold your itchy finger on the trigger of your new gun- being one of a wave of first time gun buyers in the area in the run up to the Grand Jury decision.

Perhaps you will don your KKK hood, joining other men who call themselves wizards and dress like Harry Potter extras and let yourself loose the community armed and prepared to use lethal force against protestors in Ferguson who have been, since August 9th when the unarmed Michael Brown was gunned down killed while surrendering, overwhelmingly peaceful in the face of the occupying force armed to the teeth raining tear gas down and pointing guns at them.

Perhaps you will follow the events, like me, from a quiet New England town with white picket fences and a police presence that will not be elevated because it never is.

Perhaps you will be an officer, or a member of the National Guard, given unlimited resources to protect and enforce the status quo.

As we watch or participate in the events that come after the grand jury decision we must face the real state of emergency in this country, which systematically pursues the suppression of people of color.

“What happens to a dream deferred?” Langston Hughes famously asked, and then answered: “Maybe it just sags, like a heavy load. Or does it explode?”

The dream, be it the American Dream, or Martin Luther King, Jr.’s dream, are not within reach to a growing number of people in this country. That the middle class is disappearing even as we are told that our economy has recovered from the 2008 crash brought on by a Wall street criminals who have faced little to no consequences for their crimes while kids like Michael Brown get aggressively run down and killed for the crime of jaywalking makes those dreams sag like a heavy load.

When it comes to income inequality, chew on this:

Does it sag, like a heavy load, or does it explode?

The State of emergency that is playing out in Ferguson right now can take step in the right direction of equanimity and justice when a white officer in the national guard, or the Ferguson police department puts down their gun, disobeys orders to suppress righteous dissent, and joins with the oppressed community seeking justice. 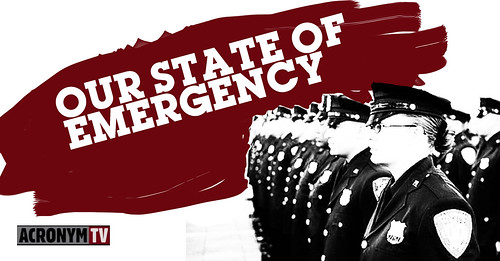 Shouted into the void by The Punk Patriot at 1:52 PM