How The Supreme Court Made the U.S. Government Illegitimate

(Note: this is an episode clip. The full show will air on Monday, June 9)

Earlier this year, the U.S. Supreme Court ruled, in McCutcheon V. FEC, the court struck down a limit on how much cash an individual could give to all federal candidates during an election cycle.

In the 5-4 decision, the majority of justices on the Roberts court ruled that individuals could buy elections. Or, in the words of Chief Justice Roberts,  “government regulation may not target the general gratitude a candidate may feel toward those who support him or his allies, or the political access such support may afford.”

In the dissenting opinion, Justice Stephen Bryer, did not hold back in voicing the disgust felt by an overwhelming majority of Americans (if not by a majority of Supreme Court Justices) in writing that the majority’s “legal analysis is faulty: It misconstrues the nature of the competing constitutional interests at stake. It understates the importance of protecting the political integrity of our governmental institutions. It creates a loophole that will allow a single individual to contribute millions of dollars to a political party or to a candidate’s campaign.”

Furthermore, the dissenting opinion offered up this gem:

“Taken together with Citizens United v. Federal Elections Commission today’s decision eviscerates our Nation’s campaign finance laws leaving a remnantincapable of dealing with the problems of Democratic legitimacy that those laws were intended to resolve.”  (Emphasis mine)

If we don’t have laws that empower us to deal with the problems of Democratic legitimacy, is our government legitimate?

That question, among others, in one I put to my guests on this week’s Acronym TV. 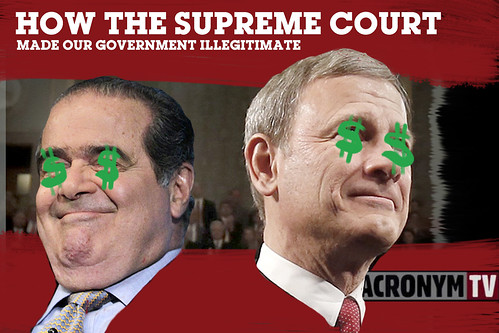 Shouted into the void by The Punk Patriot at 1:10 AM