Fight for our Future has launched a "Reset The Net Campaign" for June 5th, 2014.

The problem, as outlined at Reset the Net, is:

"The NSA is exploiting weak links in Internet security to spy on the entire world, twisting the Internet we love into something it was never meant to be: a panopticon." It defines a solution as "We can't stop targeted hacking, but we *can* stop mass surveillance, by building proven security into the everyday Internet."   Finally, the plan is to "First, get hundreds of sites & apps to add proven security (like SSL). Then on June 5, we'll run a splash screen *everywhere* to spread NSA-resistant privacy tools."

Kevin Zeese is an attorney and political activist who works on peace, economic justice, criminal law reform and reviving American democracy. He co Directs It’s Our Economy, serves on the steering committees of the Chelsea Manning Support Network, and is an organizer at PopularResistance.org. 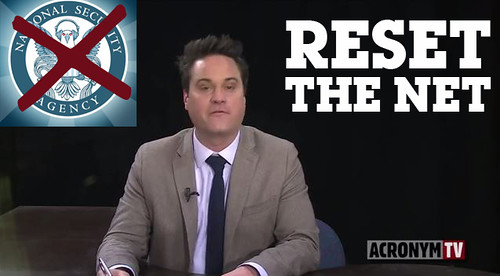