Video: The Day We Fight Back Against The NSA

Activists in New York City commandeered the Verizon building to promote the February 11th day of action to stop the NSA.

Members of the New York City Light Brigade, The Illuminator Art Collective and other allies turned the Verizon building in downtown New York into a large billboard to project the all seeing “NSA eye” along with text stating “you will never be alone”, “our eye is on you”, and “Wherever you go, whatever you do, you are under surveillance.”

The use of the Verizon building is significant because Verizon has been complicit with the NSA in spying on U.S citizens.

February 11th has been dubbed "The Day We Fight Back Against The NSA” by a broad coalition of activist groups, companies, and online platforms who will hold a worldwide day of activism in opposition to the NSA's mass spying regime.


According to a press release:

“The day of activism was announced on the eve of the anniversary of the tragic passing of activist and technologist Aaron Swartz. The protest is both in his honor and in celebration of the victory over the Stop Online Piracy Act two years ago this month, which he helped spur.” 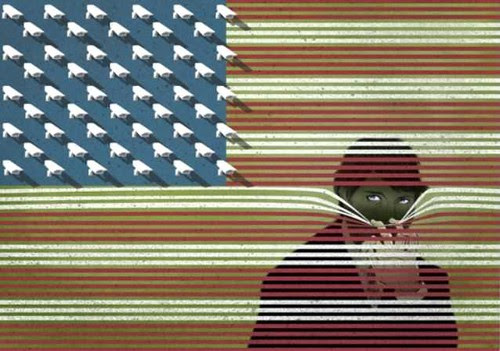