Another U.S. Citizen Targeted For Assassination By Obama Drone Program?


Today on the Resistance Report, an interview with Kevin Gosztola of FireDokeLake.com.

Two recent stories that shed new light on how the Obama administration utilizes drones in the war on terror came to light yesterday. First, Glenn Greenwald and Jeremy Scahill, via their new venture First Look revealed that:

“According to a former drone operator for the military’s Joint Special Operations Command (JSOC) who also worked with the NSA, the agency often identifies targets based on controversial metadata analysis and cell-phone tracking technologies. Rather than confirming a target’s identity with operatives or informants on the ground, the CIA or the U.S. military then orders a strike based on the activity and location of the mobile phone a person is believed to be using.”

In a related story, the Associated Press reported on the “case of an American citizen and suspected member of al-Qaida who is allegedly planning attacks on U.S. targets overseas underscores the complexities of President Barack Obama's new stricter targeting guidelines for the use of deadly drones.”

The AP was complying with a White House Request not to release the country where this American Citizen was located because this country, which the Los Angles Times later revealed to be Pakistan, was not friendly to US Military intervention and the administration claimed that publishing the name of the country could “interrupt ongoing counter terrorism operations.“ 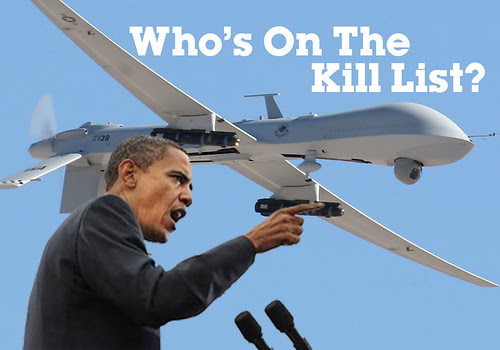