The Smearing of Snowden 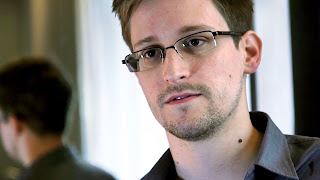 The media's vicious smear campaign against Edward Snowden is so predictable, Snowden himself anticipated it exactly. In recently released footage from the NSA whistleblower's initial interview with reporters Glenn Greenwald and Laura Poitras, Snowden, when asked what he believes the U.S. government's "response to your conduct will be," replies:

"I think the government's going to...say I have committed 'grave crimes,' that I've, you know, violated the Espionage Act. They're going to say I've...aided our enemies in making them aware of these systems..."

And so they have.

What Snowden seems to have failed to predict was just how much of those claims would come not from the political right, but the left. As Greenwald has pointed out in his Guardian blog, the most vitriolic attacks against Snowden have been made by many of the same liberals who denounced the warrantless surveillance program under George W. Bush.

California Democrat, Sen. Dianne Feinstein, chair of the Senate Intelligence Committee, called Snowden's leak " an act of treason." Speaking to Bob Schieffer on CBS's Face the Nation (06/23/2013 broadcast), Feinstein made numerous fatuous claims, including that Snowden was working with China and the "WikiLeaks group," and called for his extradition from Hong Kong. "I want to get him [Snowden] caught and brought back for trial," Feinstein said, adding, melodramatically, "The chase is on!" This is, after all, television news.

Maine "Independent," Sen. Angus King, echoed Feinstein's views. Though King said he was initially unsure what to think of Snowden, he told The Takeaway last month (06/28/13), "I'm moving more and more towards the treason end of the scale." This from the man The Portland Phoenix, in its endorsement of him last fall called "a serious thinker with a strong bent for...well-considered understanding" ("The King Impression," 10/31/2012).

King, like so many politicians and pundits, particularly takes issue with the manner in which Snowden went about releasing the information about the so-called PRISM program. Yet, as Greenwald keenly points out, even if Snowden had utilized the traditional whistleblower channels, he "would have ended up having to go to the very same members of Congress who think that not only are these programs good, but that they ought to remain secret" (Democracy Now!, 06/24/13). To wit, King claims Snowden could have "contacted elected officials with his concerns."

Furthermore, this tactic of quibbling over policy or procedure ("I support the idea, but not the process,") is a classic liberal cop-out that essentially allows politicians to avoid taking an actual stand on an issue. (See: The Portland City Council.) It is sort of like the liberal lawmakers who claimed they "understood" and "shared" the concerns of Occupy Wall Street protesters, but did not support their actual occupation of Wall Street. The point, as Greenwald acknowledges, is this myopic focus on tactics is a distraction from the actual content of Snowden's revelation.

The other criticism that has emerged among Snowden's liberal detractors is the fact that he fled the country, rather than stay and "own up to his actions." Citing examples like Martin Luther King, Jr., Nelson Mandela and Henry David Thoreau, media commentators have tried to argue Snowden's actions do not truly constitute an act of civil disobedience since he did not willingly go to prison for his "crime."

MSNBC host, Melissa Harris-Perry has garnered particular attention for her numerous attacks on Snowden--who she condescendingly refers to as "Ed Snowden." "I can see the merit in our knowledge of the NSA programs," Harris-Perry editorialized on her self-titled show (06/29/13), "but Edward Snowden is risking a lot to save his own skin."

As someone who has, admittedly, never watched Harris-Perry's show, I am struck by her snide, flippant attitude and decidedly non-professional one-liners in this clip. "We can't even get [Russian Prime Minister, Vladimir] Putin to give back a Super Bowl ring," she jokes in reference to the U.S. government's apparent inability to locate Snowden. (Yeah...I don't get the reference, either...) The remark is met with audible off-screen laughing, leading one to wonder whether this is supposed to be a news show or a sitcom.

Miami Herald columnist, Leonard Pitts, also jumps on the "this-ain't-civil-disobedience" bandwagon. In a recent column reprinted in The Portland Press Herald ("By seeking asylum, Snowden sheds doubt on his motives," 07/10/13), Pitts, like Harris-Perry, also takes issue with Snowden's "choice" (did he really have any other...?) to flee the country.

"Wherever Snowden goes," he writes, "he has no intention of coming home to answer for what he did." And what about those in power who established this mass, illegal wiretapping program? Should they not be expected to "answer for what they did"?

Indeed, Pitts says next to nothing about the actual spying program Snowden uncovered, as if it is irrelevant. And for liberals like him and Harris-Perry, it is. (Near the end of his piece, Pitts writes, without irony, "there's also something unseemly about some guy sitting behind his desk smugly advising some other guy to put the rest of his life at risk for the sake of principle." You're damn right there is, Leonard.)

The problem with the whole civil disobedience angle is Snowden is not the one who broke the law--the U.S. government is. Snowden merely called attention to the crimes. And now, predictably, he seems doomed to take the fall for his moral act of defiance.

Thus is the disjointed, unjust logic of a corporate state that allows corporations to savage and plunder the natural environment without penalty. It allows companies to spew endless amounts of heat-trapping gases into the atmosphere, free of charge, as if it were their own personal trash repository. Such a "profit-over-people" mentality allows "too big to fail" banks to openly engage in fraud and high-risk betting that trashed the global economy. And it is a corporate state that, ultimately, allows a racist, renegade civilian to murder an innocent, unarmed black boy and get away with it.

Edward Snowden, like Bradley Manning and Julian Assange, dared to defy the unconstitutional abuses of power of the corporate state, and now he faces life in prison for doing so.

Here's my takeaway: None of these debates over Snowden's tactics, motives, past statements or personal characteristics detract from his actions.

Media pundits can play the "shoot-the-messenger" game all they like. Snowden uncovered a vast, unprecedented and highly disturbing spying program that threatens the privacy, civil liberties and safety (yes, safety) of all Americans. The government is collecting and storing nearly every record of electronic communication on all of us. Those who believe they have "nothing to hide," or who cynically claim they are not surprised by our government's actions are, sadly, missing the point.

If anything, the Snowden affair has further demonstrated the depressing state of mainstream journalism as well as the hollow cravenness of the liberal class.

Adam Marletta is a freelance writer and a candidate for Portland's City Council. He supports public space for people, a living wage, and cutting taxes by ending corporate welfare.
Shouted into the void by Unknown at 11:59 AM