A Question of Torture 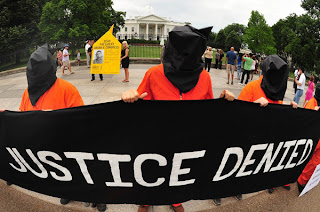 "Anyone who fights with monsters should take care that he does not in the process become a monster. And if you gaze for long into an abyss, the abyss gazes back into you."
- Friedrich Nietzsche


Amid the frantic, nonstop media coverage of the Boston Marathon bombing, another equally horrific news story was, perhaps predictably, overshadowed. A nonpartisan, independent review commissioned by the Constitution Project confirmed what many of us had long known: The United States, in the years following the Sept. 11, 2001 terrorist attacks, deliberately and knowingly engaged in torture.


The nearly 600-page report concludes the U.S., in the aftermath of 9/11, “indisputably” engaged in “the practice of torture,” and that the highest officials within the Bush administration bear responsibility for it according to The New York Times(04/16/13). The authors of the report called the widespread use of torture unprecedented. “[There had never before been] the kind of considered and detailed discussions… directly involving a president and his top advisors on the wisdom, propriety and legality of inflicting pain and torment on some detainees in our custody,” the report states.


The report’s authors find “no justification” for the use of torture. They add that it “damaged the standing of our nation, reduced our capacity to convey moral censure when necessary and potentially increased the danger to U.S. military personnel taken captive.”


This is certainly not news for most citizens. Most Americans—whether they approve of such heinous practices or not—at least have some inkling of the government’s use of so-called “enhanced interrogation techniques.” But the panel’s report should finally put an end to any remaining debate or uncertainty (most of it generated by the corporate media) that still surrounds the issue.


Regardless, Americans’ general response to these findings has been a collective shrug. Perhaps that is due to a general acceptance (among both conservatives and liberals) of torture as a legitimate interrogation technique in the “war on terror.”


A poll conducted last fall by Professor Amy Zegart of Stanford University’s Hoover Institution finds 41 percent of respondents support the use of torture in questioning designated “enemy combatants”—an increase of 14 points since 2007. An additional 25 percent believe it is acceptable to use nuclear weapons to combat terrorists, while a whopping 69 percent favor killing suspected terrorists outright through targeted assassination programs.


Zegart attributes the steady climb in support for torture (which, curiously has increased, rather than decreased during the Obama years) to popular portrayals in shows like 24 and this year’s Oscar nominated film, Zero Dark Thirty. I believe it has more to do with the simplistic dichotomization and overalldumbing down of our political culture. But pop-culture’s pervasive glorification of sadistic acts of torture by rugged heroes like Jack Bauer likely does not help.


Of course, torture’s widespread public acceptance and support does not change the fact such inhumane treatment is still illegal under dozens of international laws. While comedian Jon Stewart may disagree, George W. Bush, Dick Cheney, Donald Rumsfeld and other prominent administration figures, according to the dictates of the Geneva Conventions and the Convention Against Torture (both of which the U.S. is a signatory to), are guilty of war crimes and crimes against humanity. They should all be in prison. Yet immediately after taking office, Barack Obama nixed any notion of criminal investigations for illegal acts committed by the members of the Bush administration, preferring to “look forward rather than backward.”


Not only was Obama’s refusal to prosecute Bush and Co. politically cowardly, legalistically speaking it was downright asinine. Law enforcement is, by its very nature, predicated on “looking backward” as that is precisely where the crime has occurred—in the past. Consider the utter absurdity of Jack Abramoff, Adam Lanza or even Boston bomber, Dzhokhar Tsarnaev pleading to a courtroom, “Your honor, my crimes all occurred in the past. We need to look forward rather than backward so we can heal as a nation.”


Indeed, without justice, victims can never “move forward.” In the words of Saint Augustine, “Charity is no substitute for justice denied.”
Instead of a jail cell, George W. Bush received an honorary presidential library. As Ralph Nader observes in a recent article (“He is Comfortable in Bush’s Inferno,” 04/21/2013), the traditional rule of law that once governed our nation—which clearly lays out a formal process of impeaching criminal presidents—no longer seems to apply. “The American people have yet to come to terms with the reality that presidents are above the law,” Nader writes. “Presidents can commit repeated crimes in an outlaw presidency so long as they can invoke, however falsely and vaguely, national security.”


Torture is never justified. Never mind its proven failure to solicit accurate, useful information from its victims. Torture represents the ultimate debasement of one’s humanity. Those who resort to torture succumb to the most savage, sinister urges of human nature.


Torture, Chilean author Ariel Dorfman wrote, “presupposes, it requires, it craves the abrogation of our capacity to imagine others’suffering, dehumanizing them so much that their pain is not our pain. It demands this of the torturer, placing the victim outside and beyond any form of compassion or empathy, but also demands of everyone else the same distancing, the same numbness…”


But torture is more than just brute, physical harm. As Naomi Klein explains in her superb book, The Shock Doctrine: The Rise of Disaster Capitalism the torturer’s ultimate goal is to psychically erase the prisoner’s identity and create a new one from scratch. Psychologist and shock-therapy innovator, Ewen Cameron, sadistically used electroshock treatment on his patients in an effort to literally wipe their minds clean—to create a “blank slate” onto which he could start anew.


This is how the totalitarian Party finally “reforms”Winston Smith in George Orwell’s 1984.


“We shall squeeze you empty and then we shall fill you with ourselves,” O’ Brien tells Winston during the novel’s grim and lengthy torture sequence. And so they do. By the dystopian novel’s end, the rebel Winston finally pledges his unwavering loyalty to Big Brother.


“Nothing in the world was so bad as physical pain,”Orwell wrote of Winston’s torture. “In the face of pain there are no heroes, no heroes, he thought over and over as he writhed on the floor…”
Shouted into the void by Unknown at 2:23 PM