So the Conservative Political Action Committee had a panel in which they discussed the Occupy Movement vs the Tea Party.

It's on C-SPAN, and is currently not available for embedded playing. So here's a link: http://www.c-spanvideo.org/program/304376-8

I would say, "Enjoy!" but I think you're going to have a REALLY hard time doing so. It's extremely cringeworthy.

The Occupy Movement Shared Their Thoughts about CPAC

The annual corporate greedfest known as CPAC was turned upside down today by thousands upon thousands of union members, community activists, unemployed workers and our good friend the giant Fat Cat. Dozens of reporters trained cameras on the sprited Washington, D.C. scene. Union banners waved as throngs of marchers surged into the street and up the hill to the hotel entrance. Protesters chanted, sang, drummed and danced while grandmothers sat down in the street to protest attacks on Medicare. 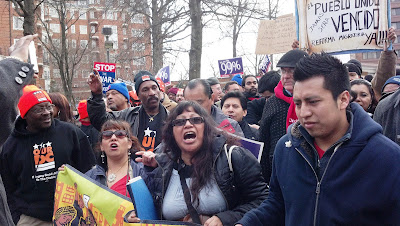 Police gave up trying to keep the huge crowd on the sidewalks. They blocked off the street as the peaceful protesters vented their thoughts about greed, tax dodging, unemployment and the war waged on working families.


Teamsters with "Stop the War on Worker" signs joined autoworkers, sheetmetal workers, firefighters, elevator constructors, UFCW, SEIU, AFSCME, UNITE. Community groups from as far away as Baltimore showed up by the busload.

Some of the entitled jerks attending CPAC had gleefully predicted violence, the way they always do, then did their best to provoke it. With expensive suits and camera equipment, they waded into the crowd hurling belligerent questions at the protesters. A security official -- was it a Secret Service agent -- took one entitled jerk away from the group he was badgering and gave him a talking-to.

The rally got off to a slow start around noon, as steelworkers, UAW members and Teamsters formed a picket line around the Fat Cat chanting, "Hey, Hey, Ho, Ho, Union busting's got to go." But at 12:30 someone shouted "Oh my God, thousands of marchers!" Led by drummers they filled the street, waving signs and banners as cars honked and police officers tried to herd them onto the sidewalks. "Our DC" and "We Are The 99%" signs joined "Recall Walker" and "Greed is Good--Romney-Gekko."

Soon the huge crowd surged up the hill, past the police and security, bellowing, "The People United Will Never Be Defeated!" Then they peacefully marched down again and regrouped in the street. Two women sat down on the pavement, soon to be joined by many more. Some gave speeches, some chanted and some sang along with pro-movement songs made up on the spot.

The CPAC one percenters had some charming things to say: @BossyMother called them "mutant scum." The delightful @stephenww tweeted, "I think we all can agree that the #OccupyCPAC crowd should get free contraception." @JimForbes_Pasco refers to the peaceful protesters as "OccupyCPAC goons."

Shouted into the void by The Punk Patriot at 10:30 PM